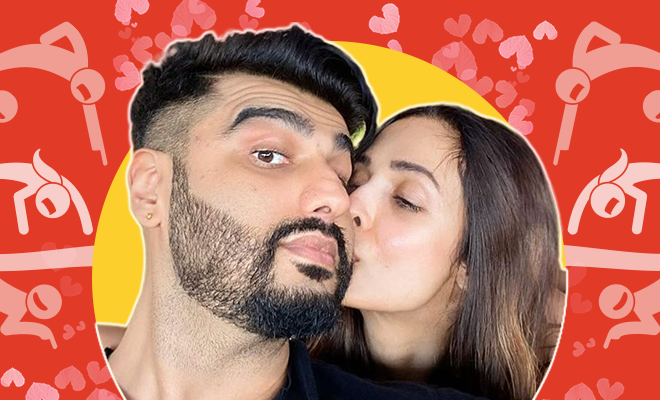 Once Again, Malaika Arora Trolled For Her Age And Her Relationship. Dear Trolls, It’s Getting Old

If there’s ever an award for the most judgmental country ever, India would probably win it or at least give a tough competition to whichever country does. If India was a person, it would be a nosy aunty who likes to assassinate a woman’s character at the first opportunity she gets. Internet has become a breeding ground for the trolls who spew venom with an unbelievable amount of proficiency. If they put the same effort in to building their lives, our society wouldn’t have been progressing at snail’s speed. Malaika Arora has been a common target for these velas, and I feel it’s because a woman who is fierce and independent with no fucks to give about everyone’s judgement makes them extremely insecure.

Once again, netizens took the liberty of throwing shade at Malaika Arora and Arjun Kapoor on a rather lovey-dovey picture she shared of them. In the picture, she is seen kissing him on his cheek and she captioned it, “Sun, star, light, happiness…….2020.” What was wrong with this? It’s so cute. But trolls tried their best to fuck their happy moment with their unkind words.

A user went ahead and warned Arjun Kapoor that this could destroy his career, “@arjunkapoor you didn’t learn a thing from Vivek Oberoi’s career right”. Another one just blamed Arjun for wrecking Malaika’s home and wrote, “Divorce ki wajah.”

As expected, a few users went on to age-shame Malaika, as if she owes it to them to date in her own age group. “It’s son, star, light,” wrote one oversmart user. Another one called them, “Bacha with aunty.” Dear trolls, you’re losing your edge, because going after someone for their age is so old! Come up with something that’s worth talking about. Nobody cares about their age gap and some of these trolls may even be those uncles hitting up on younger girls, who knows?

ALSO READ: Malaika Arora Says People Judge Her For Getting A Second Chance In Love. Who Are We To Judge?

It’s a shame that in our country women are judged so much for their personal lives (and also almost everything she does!). Malaika Arora had the strength to walk out from a marriage when it failed instead of suffering in it. She had the courage to pursue happiness without thinking about society and that’s how it should be. Whatever her choices are, we are nobody to judge her. When will we stop this?