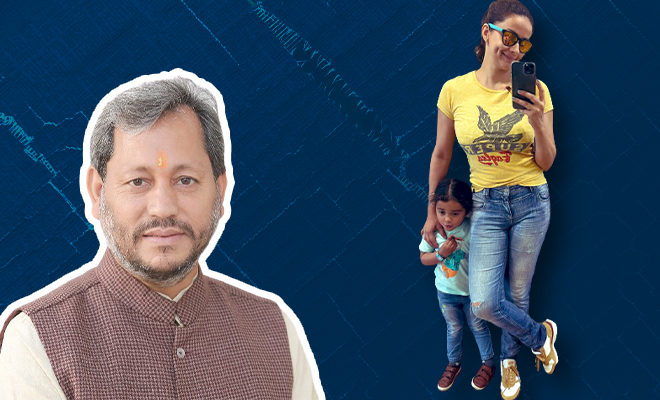 Women Rip Misogyny A New One With #RippedJeansTwitter After Uttarakhand CM’s Remark. We Call That Sending A Message!

Full disclosure: I don’t own a pair of ripped jeans, because the brands that make stylish ones don’t care to my body size (Umm, you listening, denim brands who want us to ‘live’ in our jeans?). I’d love a pair, but I don’t particularly regret not owning one, except right now, while #RippedJeansTwitter is taking Twitter by storm. I would have loved to flaunt my gams, clothed in ripped denims because according to Uttarakhand CM Tirath Singh Rawat, women wearing ripped jeans are sending a particular type of message to society. And I’d like to be one of the delivery partners of this message, which is—STOP FOCUSING ON OUR CLOTHES AND TELLING US WHAT WE CAN AND CANNOT WEAR!

Wow, should get this printed on the back of a denim jacket.

For those unaware, on Tuesday, the newly appointed honourable CM of Uttarakhand was at a workshop organised by the Uttarakhand State Commission for Protection of Child Rights in Dehradun. And his dainty sensibilities were hurt to see that the NGO was being run by women who donned ripped jeans. He instantly handed them a character certificate by saying that such women set a bad example for society, cannot raise children well, and send a bad message about culture, blah blah BS.

I swear if I had a penny for every time people focused on women’s clothing choices instead of actual matters of import, I’d be rich enough to rig international politics and establish a better world for women.

Anyway, speaking of sending a message, women decided that they could not discredit a state head’s words. So they proved him right by using their ripped jeans to send a very clear message. It began with Navya Naveli Nanda, the granddaughter of Amitabh Bachchan, posting pictures of herself sporting ripped jeans on her Instagram stories, with a message that was as loud and clear as her grandfather’s baritone.

“Change your mentality before changing our clothes because the only thing shocking here is the message comments like these send to society.” In another story, she said, “I’ll wear my ripped jeans. Thank you. And I’ll wear them proudly.”

Knowing social media, and Twitter especially, I called that a moment was building. And sure enough #rippedjeans and #RippedJeansTwitter was trending on Thursday, with several women posting their pictures in ripped jeans, tearing patriarchy and misogyny a new one.

#RippedJeansTwitter
Heya!! What do you think a message I am giving to society?
Lemme tell you:
Mind your own business!🤷 pic.twitter.com/pWmbWFN7pQ

It’s the eyes of a beholder not the woman or neither the ripped jeans responsible for destruction ! #RippedJeansTwitter pic.twitter.com/EeEvY6kCLA

Saheb🙏.. it’s just a piece of clothing not a message board… 🙏#RippedJeansTwitter P.S – my ripped jeans … not sending any message 😎 pic.twitter.com/ObDjZ9WRL8

Actor Gul Panag too tweeted about it too.

Look, not to be a party pooper, but while I appreciate how women just RIP-ed misogyny, it is honestly ridiculous that we have to do this every time a politician vomits misogynistic crap on a national platform like this. And we all know how often that happens. Women shouldn’t have to launch every day movements to make a point that is as basic as clothes are not a testament to a woman’s character. If politicians are so easily distracted from their actual jobs by women’s clothing, then may be we need to elect better ones.

Donal Bisht Claps Back At Trolls For Shaming Her For Bikini Pictures. Her Choice Of Clothes Is No One’s Business!