The Hindu-Muslim religious problems have been ongoing in India but it seems to have gotten worse recently. We’re known to be intolerant but it looks like intolerance has crossed a line in our country. Recently a 48-year-old man from Udaipur, a tailor, Kanhaiya Lal was killed by two men over his social media post supporting BJP leader Nupur Sharma’s comments on Prophet Muhammad. A video of the gruesome killing filmed by the two men went viral on social media and was soon followed by a video of the killers bragging about the murder and about avenging an insult to Islam. Reacting to the chilling killing, Uorfi Javed questioned where we are headed while pointing out that Allah did not ask people to hate and kill in his name.

In an Instagram story, Uorfi Javed shared the video and wrote a caption questioning the situation. In another longer note, the actress said that people are killing and hating in the name of religion and god while questioning why aren’t we talking about more important issues like education, women empowerment, fast track cases for rapes and GDP. She pointed out that religions were made to ensure that people have moral and ethical sense but in today’s time, people are losing all their ethics and morality due to religion. She went on to add that extremism in man-made beliefs like religion can only cause destruction while urging people to open their eyes. Take a look at Uorfi Javed’s post. 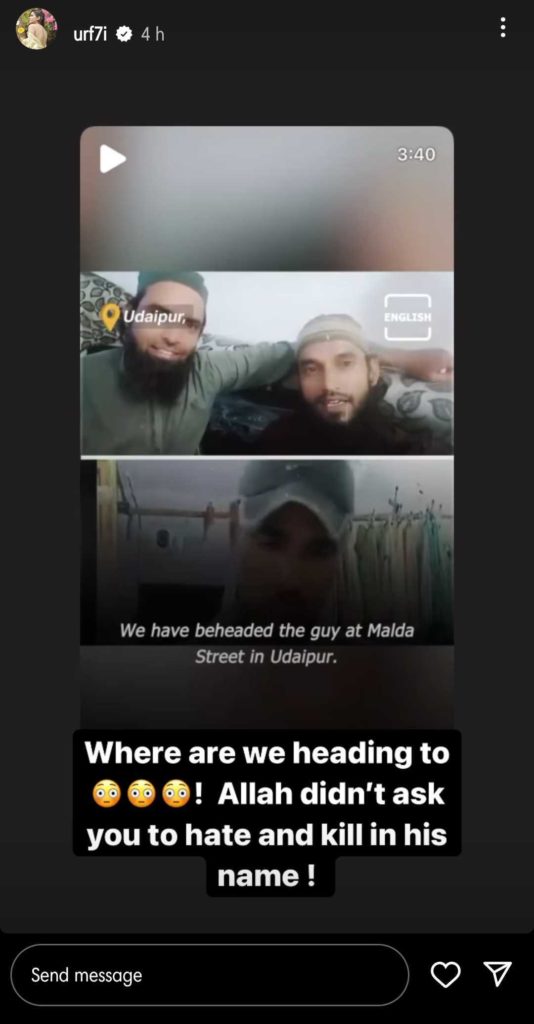 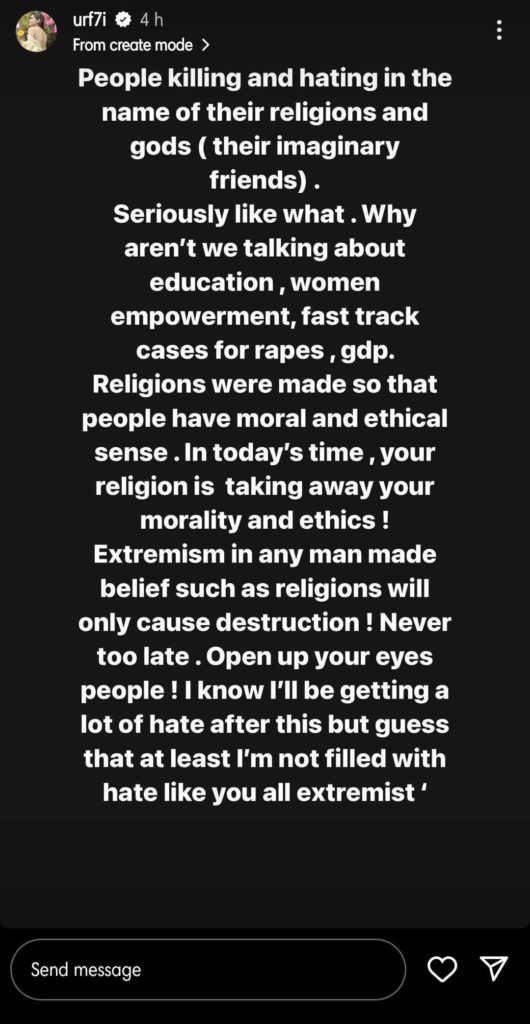 Earlier, Devoleena Bhattacharjee also condemned the murder in a tweet and called it “terrorism at its peak”.

Terrorism at its peak. And celebrating it is more disguisting & unacceptable. #UdaipurHorror https://t.co/xN6GdspGjf

Also Read: UP Police Shoots Dead 50 YO Muslim Woman Who Was Trying To Stop Her Son’s Arrest

For the unversed, the attackers identified as Gos Mohammad and Riyaz secretly recorded themselves as they entered the tailor, Kanhaiya Lal’s shop posing as customers and attempted to behead him. According to media reports, they were unable to severe his head but they did slit his throat and killed him. Soon after the video of the gruesome murder went viral, the attackers posted another video of themselves bragging about the murder and also threatened Prime Minister Narendra Modi. This has led to protests in Udaipur following which a statewide alert has been issued and prohibitory orders under CrPC 144 have also been issued and a curfew has been imposed in seven police station limits of the Udaipur district. The attackers have been arrested by the police as per media reports. Reports claim that the attackers sped on a bike on the highway on the outskirts of Udaipur as they tried to escape but were overpowered by the police and arrested.