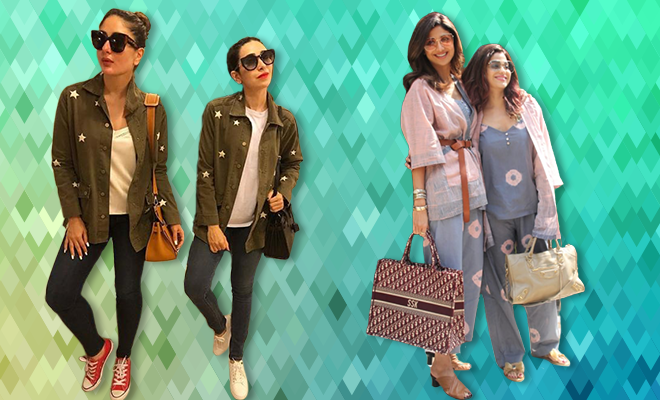 Twinning With Bae Is Passé. Let These Celebrity Sisters Show You How To Coordinate Your Outfits With Your Sibling

Having sisters is amazing. I would know since I have grown up with two. I would describe the living situation as comforting and challenging all at the same time. We are bickering over the silliest things one moment and bitching about a distant relative the next. You get the point, right? It’s like living with your BFF and your arch enemy all at once. Plus, you always have someone to share the gossip, secrets, makeup and clothes with. The latter two may require some pleading, negotiating and even threatening but most of the time it works. Sometimes you steal, sometimes you raid their closets, it’s all legal. Exchanging clothes and wearing matching outfits with your homegirl is just another perk of having a sister and celebrities siblings aren’t an exception. Remember Kendall and Kylie’s matching outfits at Met Gala? Or Kapoor sisters similar jacket? Yeah, it’s always fun to match your style with your sister.

Also Read: Katrina Kaif Is Watching Out For Sister Isabelle Kaif As She Makes Her Bollywood Debut. Why Are Sisters So Amazing?

Recently, Shilpa Shetty and Shamita Shetty were spotted twinning in a grey and pink tie and dye co-ord set and it is not the first time that the duo has worn the same outfit. It seems like they love wearing matching outfits and often add two of the same thing in their cart when they shop. Before this, Shilpa also shared a video from their trip to Goa where they were “twinning, winning and grinning” in identical red co-ords. They are just one of the many sets of celebrity siblings in Bollywood who nail the twinning trend every time they step out in matching, coordinated or exact same outfits. Here are some of the celebrity sisters who often go matchy-matchy with their fashion statements and show us how cool and super fun it is to twin with your one and only better half–your sister.

You really don’t have to put in a lot of thought and efforts in mastering the twinning trend. In fact, it is much easier than doing it with your boyfriend. Take Deepika Padukone and her sister Anisha Padukone for instance. They both wore classic fashion staples like a white Levi’s tee, white sneakers, blue denims and a black jacket, which you and your sister would def have in your wardrobe too, regardless of whether you share the same love for fashion or not.

The Kapoor sisters are no strangers to twinning. They are always seen wearing the same or similar outfits and they do it right every single time. Taking their airport look up a notch, they twinnied in black graphic sweatshirts but with slightly different designs. They even matched their accessories by carrying black sunnies and handbags. That’s how you do the twinning trend with your style twin.

Sonam Kapoor used to twin with baby sister Rhea Kapoor as kids all the time and her throwback posts on Instagram are proof. However, years later, they still win at twinning, and how! The most fashionable sister duo in Bollywood always wear coordinated outfits whether it is a wedding, jetting off for an event or photoshoots for their clothing brand Rheason.

Also Read: 10 Times Kareena And Karisma Proved Having A Sister Is The Best Thing Ever And You’ll Relate