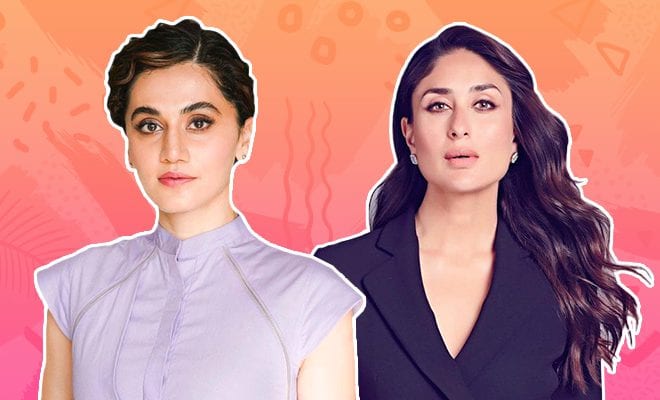 Taapsee Pannu Said Kareena Kapoor Being Trolled For Hiking Her Fees For Sita Reeks Of Sexism. We Agree!

Somehow, the world is so averse to the idea of women making good money, or stepping up for what she deserves. It is baffling how a woman is expected to be achingly modest, unrealistically non-materialistic and stupidly docile. A woman who just accepts patriarchy with a smile is praised to be such a sweet one. I wonder if that got any gal what she deserved! From being sidelined to being paid an immensely less salary for it, Bollywood, like other industries, comes doused in sexism that demands us to be happy with being treated unfairly. So, when Kareena Kapoor Khan decided to hike her fees to Rs. 12 crores for playing Sita in an adaptation of Ramayana, she was heavily criticised for it. But Taapsee Pannu, an actress who we know to be refreshingly opinionated, spoke up in support of Kareena.

In a recent interview, Taapsee Pannu pointed out that if a man had hiked his fees, people would probably congratulate him for an elevation in his market value. She added that they would say that he is achieving so much in life and feel proud. “But because a woman is asking for it, she’s called ‘difficult’, ‘too demanding’. It’s always like that,” Taapsee explained.

Did you know Kartik Aaryan allegedly charged Rs. 20 crores for only ten days of work in Ram Madhavani’s Dhamaka? Did you know, as per a report by Pinkvilla, six-films-old, Tiger Shroff is getting paid Rs. 30 crores for Jackky Bhagnani’s next? So why can’t a senior, award-winning female actor, like Kareena Kapoor Khan, who has been in the industry for over two decades, demand Rs. 12 crores for playing a landmark role? Even if she got paid what she asked for, we know for a fact that compared to her male peers, she still would have been underpaid!

“She is one of the biggest female superstar we have in the country. If she demands a certain salary for the time, it’s her job,” Taapsee Pannu told Bollywood Bubble. She also asked if the actors who will play other characters are doing it for free.

ALSO READ: Kareena Kapoor, Alia Bhatt And Karan Johar Got Asked About The Pay Gap In Bollywood. Kareena’s Response Was Interesting, Karan And Alia Sat On The Fence.

Trolls had shameless dragged her religion in between saying why should Kareena Kapoor Khan, who married a Muslim man, play Sita? They questioned why should she be paid that much. Kareena isn’t doing the film but really, how sexist and intolerant people can get? I am sorry but nobody really cared when Salman Khan played Radhe in Tere Naam and now in the movie of the same name. Isn’t that the name of a Hindu God? I am not saying it should be a problem; that would be too petty. But if the movie was ‘Radha’ and Kareena was playing the titular role, the trolls would have attacked. It’s such a shame!

ALSO READ: Kangana Ranaut Slams Actresses Justifying The Pay Disparity In Bollywood. We Agree With Her But It’s An Uphill Battle