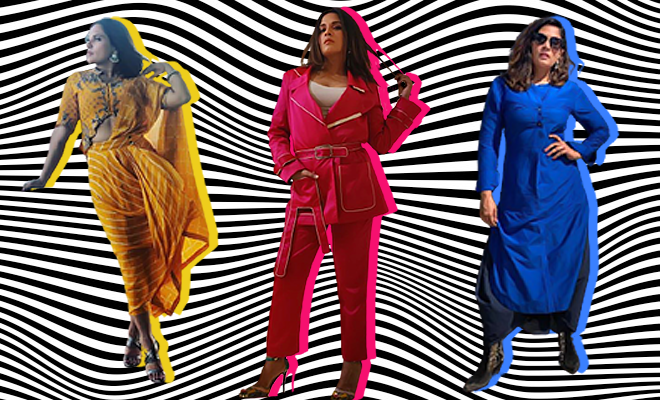 When it comes to fashion, I am always looking for something interesting and out of the ordinary. Quintessential sartorial choices do not hold my interest and that’s why I turn to celebrities for some serious style inspo. However, not everyone can be called a fashion plate. In fact, very few of the can keep up with the ebbs and flow of fashion world. Even fewer have it in them to go against the grain and take fashion risks and pull off daring outfits, unconventional hues and quirky styles. One of them is actress Richa Chadha.

She is out shooting on exotic locations and sashaying on the red carpets with beau Ali Fazal. But that’s not what got us green with envy (okay, it did a little bit) but mostly it was her unconventional and totally cool OOTDs she served. Richa’s fashion statement is anyway very rebellious and refreshing. She doesn’t easily give in to the traditional norms of fashion and it shows. However, she broke all style rules and gave us three steal-worthy looks that were equally eccentric and effortlessly stylish.

From an easy breezy contemporary saree to an updated version of kurta pajama set, here are three looks we loved from Richa Chadha’s Egypt diaries as she breaks all the fashion status quos and looks refreshingly chic.

Also Read: Nora Fatehi’s Minimalistic And Chic Fashion Statement Has Us Hooked. Here Are 5 Looks You Can Steal To Look Super Stylish At All Times

For the lovely open air Chaplin concert, chose a this pant suit, or as we say Rani Pink… 👖 @twopointtwostudio, 👡 @papadontpreachbyshubhika . 💎 @outhousejewellery . Hair @moataz.super . 📷 @mostafa.abdel.aty for the red carpet. Styled by @anishagandhi3 @rochelledsa . . . . . @elgounafilmfestivalofficial

Any celebrity would walk down the red carpet of a black-tie affair wearing an elaborate, floor-sweeping evening gown but Richa’s style is more avantgarde than that so she suited up in the coolest outfit we’ve seen. For an open-air Chaplin concert at El Gouna Film Festival, she kept things semi casual with a pantsuit by Two Point Two Studio in a bold fuchsia pink, or like she said, rani pink. The jacket with a belted front and statement pocket is making the look cool and classic at the same time. She paired the powersuit with Papa Don’t Preach heels and minimal jewellery.

According to her caption, Richa wanted to wear something ethnic for a shoot and she put her finger on the most experimental ethnic wear ever. Look at this woman pulling off a long blue kurta with round hemline and black dhoti pants paired with black combat boots (which are studded, BTW) like it is no big deal. She looks like such a badass fashionista in this look. Could you imagine an ethnic look to be this unconventionally stylish and cool. Well, with Richa, you could.

This outfit is my absolute favourite for so many reasons. The bright sunny colour, the leheriya-bandhni print and fabric seemingly as lightweight as air makes this saree a perfect fit for summer weddings. Plus, the pre-stitched drape makes it so manageable and comfy. Richa tells the deets on her outfit in her caption which reads, “Wanted to do something ethnic, colourful… Against the Red sea…this interpretation of the Sari (meets lungi) was perfect!” And, we agree. She wore this saree for press junkets at the El Siyadi, El Gouna and we are sure even a long, busy day in this easy-breezy, effortless saree was pretty doable. Pinning this look for my BFF’s wedding next summer.