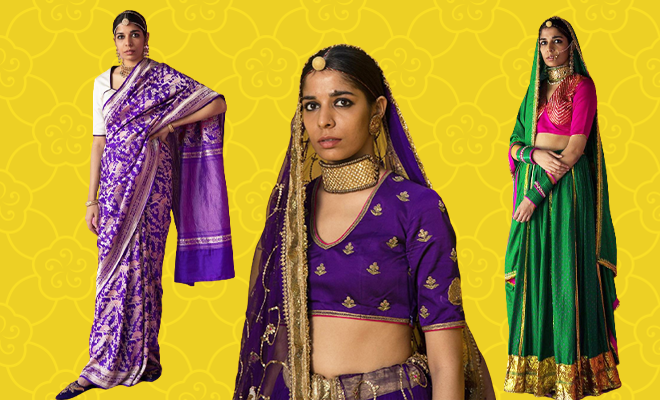 Raw Mango’s Show At The Lakmé Fashion Week 2020 Featured Real Women And Captured The True Essence Of Marwari Weddings. We Love This!

This year’s fashion week is different in a lot of ways. The runways are digital, there’s a broader audience accessing the show from the comfort of their homes and for the first time, the Lakmé Fashion Week has gone season-fluid. Apart from the systematic structure of the show, the collections by the designers are also presented quite differently—through creative and highly cinematic fashion films. Clothing label Raw Mango showcased its festive collection ‘Moomal’ on the first day of the fashion week and its emotion-evoking fashion film is all everyone could talk about.

For his festive collection this year, Sanjay Garg, the founder of Raw Mango drew inspiration from his hometown Rajasthan and celebrations he has grown up being a part of. The state which is known as the heartland of crafts, colours and culture was imitated not only in his collection but also in his fashion film. It showed a traditional Marwari wedding of the yore in a local set-up with peeling, rustic walls, coupled with original folk music in the backdrop. What is even more beautiful is that he didn’t cast any glamourous runway models but featured real women in all their simplistic glory.

Also Read: As Designers Abandon Celebrity Showstoppers, Models, Clothes And The Craft Gets The Spotlight On Virtual Runways. About Time

The outfits weren’t fancily draped or styled but worn the same way women in your family would for a wedding. There were no experimental makeup looks. Hair tied back neatly in a bun or long braid adorned with matha patti, eyes rimmed with a stroke of kajal and classic nude, pink and red lips summed up  the beauty looks for the show. The looks were as simple and realistic as the whole feel of the film which makes it relatable and relevant to the T.

Talking about the collection, it featured a palette of bold and rich colours influenced by the heady hues of Rajasthan and its culture like bright purple, rani pink, jade green, violet, white and red with golden gota and bandhej detailing. The silhouette and styles were also inspired by traditional Rajasthani poshak. This included bodycut cholis, long blouses and kurtis with gathered ghaghra skirts, organza sarees and odhanis. Traditional artistic elements like peacock motifs were also incorporated in the collection which has for long been associated with Rajasthan’s cultural heritage.  The outfits look exactly like something that would be passed down from generations to generations for their trans-seasonal and perennial style.

The women cast for the show belong from varied walks of life, besides modelling, including Journalist Fiza Jha, Cinematographer Riya Khicher and fashion designer Naveli Choyal (of Raw Mango). The bride in the film is Sanjay Garg’s sister. These women make Raw Mango’s simplistic approach to runway fashion even more relevant and mesmerising.

Sanjay Garg revealed that he visited his native Rajasthan during the lockdown and the architecture of the forts and havelis inspired the visual concept of the campaign. He wanted to recreate the Shekhawati wedding with rituals and traditions portrayed in their true essence. The film took us back to the times when there were no destination weddings or brides wearing haute couture, just women singing folklore in a humble house setting, wearing traditionally rich and culturally aesthetic ensembles that they would probably pass down to their daughters and daughters-in-law as a fashion legacy. From outfits to presentation and the real women features, we love absolutely everything about this wedding clip of a fashion film.