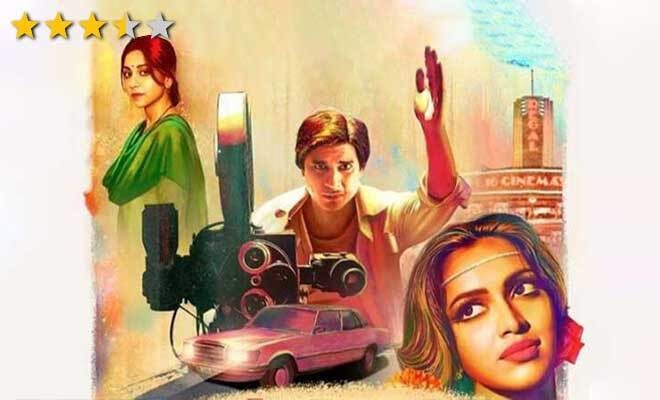 Bollywood has taught us all about immortal love stories. But if I’m being honest, there’s something really appealing about the scandalous real-life love stories of celebs from the golden era of 70s Bollywood. I may not have been born in that era but looking at the things we’ve been told about that time, I think what a time it must’ve been to live in, right? The bell-bottoms, huge sunglasses, slick back hairstyles, wide-leg pants and curly flicks, everything from the fashion to the scandals from that era was amazing. But it’s the love stories from that era that give life to it. The simplicity of people, their lives, love and even the scandals were rather interesting. The much anticipated Mahesh Bhatt created series Ranjish Hi Sahi takes you back to the 70s and tells the tale of his immortal romance with late actress Parveen Babi.

The series starring Tahir Raj Bhasin, Amrita Puri and Amala Paul in lead roles is written and directed by Pushpdeep Bhardwaj. This drama series takes us back in time and tells this scandalous love story with flair. Ever since I saw the teaser of Ranjish Hi Sahi, I’ve been waiting to binge-watch this series that, according to its director, weaves in not just Mahesh Bhatt and Parveen Babi’s love story in its eight episodes but is also influenced by several other people he’s met in Bollywood. While I expected eight episodes of engaging twists, turns, action, drama and music, what I got was even more interesting. But I have to say this, Pushpdeep Bhardwaj may claim that this series is inspired by true events and not a reflection of it, but it is far from the truth. This series, which is scheduled to release on Voot Select on 13 January, is a stark reminder of Mahesh Bhatt’s Filmfare interview about his history with the starlet Parveen Babi.

The Story Of Ranjish Hi Sahi

With lots of flashbacks, Ranjish Hi Sahi portrays the hard reality of the golden era of 70s Bollywood and the struggles of a newbie director without the unnecessary glamour and show-shaa. The series follows the life story of struggling film director Shankar Vats, played by Tahir Raj Bhasin and his relationship with his wife Anju, played by Amrita Puri and his rollercoaster of an affair with actress Amna Parvez, played by Amala Paul. Though Ranjish Hi Sahi starts on a rather hazy note with several repetitive scenes, it does give you a full-blown entertaining experience. It takes off slow but eventually picks up the pace and explores the depths of its three lead characters.

This isn’t the kind of thrilling show that will keep you hooked till the end but it does explore the complexity of relationships and love. For people who view the world in black and white, this show gives an insight into the grey tones of reality and the hard truths of Bollywood and stardom along with the classic 70s Bollywood music that takes you back in time. Apart from this, Ranjish Hi Sahi also gives you a glimpse of how the showbiz industry works and more importantly, it gives you an insight into the life of a director and the 70s Bollywood film sets. The series shows us all about the film muhurats from the 70s, the gossip, parties and clichéd actors, actresses, producers and their lives, hopes and aspirations. More importantly, it shows you how far we have come in terms of technology, social media as well as reel and real life. And ironically, this series about the 70s era will be released on an OTT platform.

Speaking about the characters, I couldn’t ignore the ill-fitted wig worn by Tahir Raj Bhasin, but if you have the stomach to get past it, you’ll see the ease with which the actor portrays the role of a passionate yet desperate director, Shankar Vats. The actor not only grabs eyeballs with his acting skills but also holds your attention as he narrates to you the success, life and love story of his character. You may experience a disconnect every now and then, but Tahir Raj Bhasin manages to make us feel every emotion felt by Shankar Vats including this disconnect.

Shankar Vats’ wife Anju’s character is played by Amrita Puri who left me impressed with her performance. Though her sçreen time is lesser in comparison to her co-stars, Amrita manages to make her mark with her strong character portrayal. She plays the role of a doting and determined wife who stood her ground and wasn’t bogged down by life. Amrita Puri made me somewhat love Anju for being unapologetic about her decision to forgive, forget and understand her husband’s betrayal as well as his love and loyalty towards the complex relationship he shares with the women in his life.

While Amrita played a strong woman, Amala Paul portrayed a contrasting personality of an intense woman bogged down by mental illness and a failed love life. And I must say, Amala Paul really outdid herself with her Hindi debut role. She portrays a character heavily inspired by yesteryear star Parveen Babi with just the right amount of intensity and passion. I also have to praise the makers for their choice of casting and the makeup and styling team that made Amala look like a spitting image of Parveen Babi. With a memorable performance, Amala played Amna Parvez with commendable conviction.

All the other actors also shined through their character portrayals in Ranjish Hi Sahi. Zarina Wahab delivered an earnest performance as Shankar’s mother. Paras Priyadarshan was also great in his role of Shankar’s brother Ganesh while Saurabh Sachdeva blew us away with his portrayal of ace filmmaker Jagmohan Seth in the series. But Rajat Kaul’s portrayal of his character Zubair deserves a special mention. He will remind you all about Kabir Bedi’s personality and demeanour back in the day. And it’s not like we can forget the mysterious ‘Watch-man’.

Ranjish Hi Sahi is eight episodes of an ode to not just the bygone era of Bollywood but also to the tragic love story of a filmmaker and the starlet, that we’ve already heard a lot about. While there is a curiosity factor that will tempt audiences to watch the show, the show lacks the depth I expected in terms of the story. Ranjish Hi Sahi does its best to retell the tale of a failed director who is struggling to prove his mettle in the industry as he tries to do his best as a husband, father and lover. But if I’m being brutally honest, this series may not appeal as much to people who do not know about Bhatt and Babi’s tragic love story or already know enough.

So, if you, like me, have a keen interest in scandalous and tragic love stories, this one is a must-watch. And if the immortal love story from the golden era of 70s Bollywood does not resonate with you, then you might find it difficult to connect with the show and watch it through to the end.