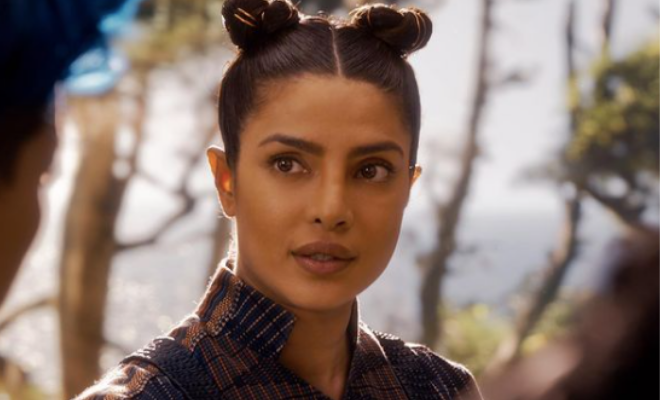 Priyanka Chopra Says There’s Nothing Like ‘Citadel’ On Television, Reveals Shooting For It Was ‘Physically Intense’. We’re So Excited!

Priyanka Chopra has made it big as a global icon and we’re all so proud of her. After watching the actress in The Matrix Resurrections, I just cannot wait to watch her in the upcoming Amazon Prime Video spy thriller series Citadel. Created by the Russo brothers and Patrick Moran, Citadel stars Richard Madden and Roland Møller alongside Priyanka Chopra. The spy thriller series has been described as an ‘action-packed spy series with a compelling emotional center’. TBH, I totally love her acting skills. While many may say it’s the Jonas effect, I’d say we got a global star who’s bigger than all the Jonas’ put together. And that’s just a fact. I mean Priyanka Chopra did point that out during Jonas Brothers Family Roast.

That being said, Citadel seems to have a special place in PeeCee’s heart. In a recent interview with Collider, Priyanka Chopra opened up about her experience on the sets of the spy thriller series as well as why she wanted to be a part of it. The Bollywood actor turned global star shared that there is no series on television that has action, drama as well as emotions in a package while adding that that’s the reason why she wanted to be a part of Citadel. Speaking further Priyanka Chopra said that it was easier to work for the series as it’s a limited series which is much better than doing something which has multiple episodes as it requires much more commitment.

“There is nothing like Citadel on television, I think. It’s extremely high scale, extremely finessed action, stunts, but at the same time it’s a drama and it has heart. So, I think there is really nothing like that on TV right now and that is one of the big reasons I really wanted to do it. Doing something for multiple episodes… you know it’s a commitment. But because this was a limited series it was really great,” said Priyanka Chopra.

The actress also revealed that shooting for her character in Citadel was physically intense, while adding that the show is ‘very special’ for her as everyone has worked hard on it. Priyanka Chopra said, “We shot it for over a year. It was really physically very, very intense for my character and I’m sure a bunch of the cast as well. It was a lot of work, but I am so excited to share it with the world because I just saw a bunch of it recently and I think it’s very special. We’ve worked really hard on it, and you’ll see that.”

Moreover, the actress also revealed that they are hoping that the series might air on the OTT platform by the end of next year.

From starring in Baywatch to snagging a role in The Matrix Resurrections, Priyanka Chopra has made us understand that there’s no stopping her. But that doesn’t stop the trolls and media from coming after her. Following the release of The Matrix Resurrections, an Indian publication highlighted that Priyanka Chopra’s appearance in the film was only for a total of 8-10 minutes. But PeeCee’s fans and her mother took a stand for her.

Retweeting a tweet from the publications that highlighted the actress’ 8-10 minute appearance, Madhu Chopra pointed out that Priyanka Chopra’s role was ‘crucial and pivotal’. Several fans of the actress also defended her screentime while highlighting that the actress gave a rather impactful performance in a short span of time which is proof that her acting skills are amazing. Some fans also pointed out that being a part of The Matrix franchise and being a part of the star-studded cast is a huge deal in itself.

Yes, tell them mam! She literally came with the solution, Sati Supremacy pic.twitter.com/dJpicbuKw3

Thankyou for preaching them. That's always been the way with Indian media. Shame on you @Bollyhungama . Learn before you speak. Be responsible.

And in those minutes solved everything lmao, do better next time and more with your own people, what a shame. Instead of support and hype writing this bs articles.

This tweet has a certain Bollywood actress' name written all over it. Jealous much? Or maybe insecure? How pathetic. First go get a 10 minutes pivotal role in a big franchise like this and then talk. https://t.co/7HAsXnGeth

And you should watch that interview. It’s absolutely fantastic to see her with the rest of the cast. Her confidence is shining through with every word that comes out from her mouth. She was equally as important as the other cast members. Thank you @EW for this. I am in AWE😍

Well, we’re so so proud of PeeCee. Shame on you media vultures for demeaning her work.

‘The Matrix Resurrections’ Review: An Amusingly Meta First Half Couldn’t Help Me Forget Why This Is A Glitch In The Franchise