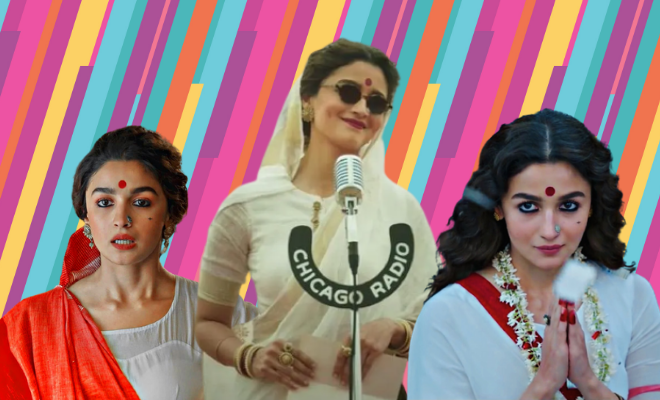 Ever since the first poster of Gangubai Kathiawadi got unveiled, which was sometime in the beginning of last year, we couldn’t wait to see Alia Bhatt as the powerful madam of a brothel in Kamathipura in 1960s, Ganga Harjivandas Kathiawadi aka Gangubai Kathiawadi. In this biographical crime film directed by Sanjay Leela Bhansali, Alia plays the titular role and brings the woman alive on screen. Her dialogues and stellar performance (it’s Alia, what do you expect) are already making a buzz on social media. Not only that, her look from the film is also being applauded and appreciated since it’s exactly how the women from the era dressed and prettied up. Draped to perfection in opulent mulmul bordered sarees and a veil over her head, Alia’s style perfectly embodies the old-world charm. Her hair and makeup too, fall in line with the character’s persona.

While dark, kohled eyes, nude lips and a huge red bindi make for the striking elements in her makeup, her hair is styled in soft waves tied in a braid or a mid-raised bun. In some scenes, she is also wearing flowers in her hair and the nude lip is ditched for bold and bright colours like fuschia or red. In the first glimpse shared by Alia back in 2020, she was dressed in a button down blouse and skirt, which was probably her look from the early years of Gangubai, before she became this powerful woman, or as Hussain Zaidi’s book labels her, one of the Mafia Queens of Mumbai’. In that poster, she is merely a teenager, rocking pigtails tied up with ribbons. Black-rimmed eyes and bindi are still there, though.

Gangubai’s look has been copied by Instagram users partly because this look is basically very different from the bevy of makeup trends and looks we have got today. It’s refreshingly simple, minimal and effortlessly beautiful. Bushy brows, no liner, heavily kohled eyes and that huge bindi in the centre of the forehead is as exciting to recreate as stunning it looks. While we (eagerly) wait for the release of Gangubai Kathiawadi, which is in July BTW, why not recreate this interesting look, maybe to switch up your regular makeup look for a retro charm or maybe for the gram. It never hurts to try out your makeup skills to ace a gorgeous look.

Here is how you can work Alia Bhatt’s look she wore in and as Gangubai Kathiawadi. Start by moisturising your face and pea-sized amount of primer. Next, use some liquid foundation like the Auric Beauty Cover Matte Foundation onto your face and blend well. Line your lower lash line with Revlon 24HR Kajal – Intense Black and some mascara to amp up the lashes. You can use Pixi By Petra Lengthy Fibre Lash Mascara. Also, use the same kajal to fake the beauty mark on your cheek just as Gangubai. Finish the look with dabbing a nude lip colour like the Kiro’s Non-Stop Airy Matte Liquid Lip Sandy Rose on your lips and cheek. Steal the red bindi from your mom’s drawer and you’re done! Don’t forget to make an Insta reel with the viral dialogue from the movie. Yes, the savage and sassy “kissi ke baap se nahi darne ka” one.