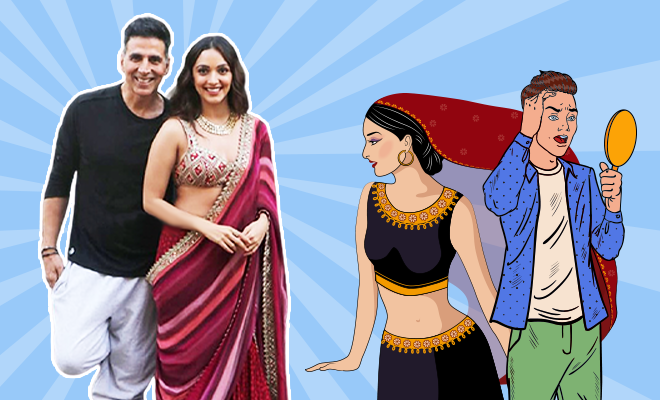 Kiara Advani Dons A Gorgeous Lehenga For The Promotions Of Laxmmi Bomb While Akshay Kumar Is Out In Sweats. Someone Please Explain Why

Being a fashion writer for quite some time now, I can say that promotional looks excite me more than the movie. I’ll tell you why. Celebrities these days have a knack for communicating the whole essence of their movie through their looks. Be it Ananya Panday’s kaali peeli fashion diaries for her movie of the same name or Sonam Kapoor wearing red for all the promotional events for her movie The Zoya Factor, I’m excited by the possibilities. Because of this reason, I was low key expecting Akshay Kumar (not Kiara Advani) to do the promotions in a saree, because, well he is wearing one throughout the movie, and secondly, it wouldn’t have been a shocker because he’s spontaneous like that. But I was sorely mistaken.

Kiara Advani and Akshay Kumar kicked off the promotions of their upcoming movie, Laxmmi Bomb and for the first press junket today, they showed up in extremely contrasting looks. While Kiara opted for a magenta polka and striped lehenga by Arpita Mehta that I would have probably picked for my best friend’s wedding, Akshay Kumar unapologetically threw on black tee and grey sweatpants (yes, sweats!) and styled the look by rolling the pants up at best.

Clearly, either there was a huge miscommunication between the two actors about where they are going for the promotions and hence the weirdly distinct looks or wait, there’s a better explanation. Maybe, Akshay ran out of f*cks to dapper up and look even slightly as dressed as his co-star. Why do guys have it so easy?

Also Read: Akshay Kumar Is Dressed In A Saree In A Still From Laxmmi Bomb. Will This Be Another Failed Attempt At Representing The LGBTQ Community?

Kiara obviously looked ethereal in the embroidered Arpita Mehta lehenga from her 2020 Blurred collection. The ghaghra set costs 78k and Kiara looks like a million bucks in it. Although some would say it’s a bit too much for a promotional event, I can relate to why Kiara dressed so glamorously.

If I had access to gorgeous designer wear and a bus full of people to do my hair and makeup but had nowhere to go for months (cause lockdown), I would have jumped on the first opportunity to glam up and would have gone all out too. Talking about Akshay’s look, I am officially done with sweats and I am not wearing them outside ever. Just looking at his look that he wore for the promotions for his movie is making me yawn. Nope, not doing it for me.

While we wait for more looks from Kiara’s promotional look book, we certainly hope Akshay steps up his fashion game too and doesn’t come straight from his gym next time, especially when Kiara looks like that. You are making her look extraa, Akshay, while it’s you who need to clean up real good to match up to her style for the promotions.

I don’t understand how guys can pull off effortless styles like athleisure for even the big events and nobody seems to care. I mean, they could actually show up on their sister’s wedding wearing sweats and no one would be surprised. On the other hand, women dress to the nines and still think they could have done a tad bit better every time. What’s up with that? Yes, women dress up for themselves but could we normalise not dressing up to the occasion every time and taking it easy for women as we have for men? Let’s do this especially now after we all have attended serious office meetings in our shorts. (If you said you haven’t, stop lying to yourself.)

PS, who else has their eyes on that gorgeous Arpita Mehta lehenga? BRB, putting a kidney on sale.