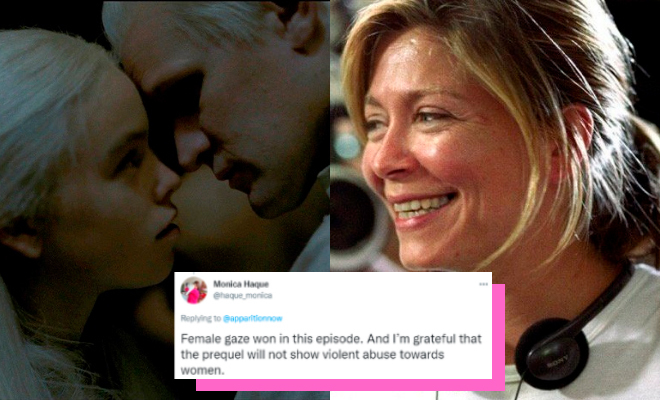 When House Of The Dragon was first announced a lot of people had made known their apprehensions; they were worried whether the prequel series would be able to match the phenomenon that Game of Thrones was. And with every episode, the prequel series is putting all these doubts to ease. In fact, the latest episode – episode 4 – was the one that was the most talked about on social media. From a brotherly reconciliation to a fallout yet again, the episode, King Of The Narrow Sea, has so many events taking place that blinking isn’t even on the cards. But the scenes that are most talked about in this one-hour episode are the sex scenes. The scenes were noticed by people on Twitter for being a lot different than one might expect out of Game of Thrones and the reason for that could be the fact that this episode of House Of The Dragon was directed by a woman director, Clare Kilner.

Yep, the fourth episode of House Of The Dragon was directed by a woman director, Clare Kilner. And many people on the internet believe that it is because of this very reason the nudity and sex scenes in the episode are more humane and add more depth to the character of Rhaenyra Targaryen. For those unversed, out of the 19 directors that directed the Game of Thrones series, one of them was a woman.

Today's episode of House of the Dragon, King of the Narrow Sea, has been directed by a woman, Clare Kilner. This is also the episode with the most sex scenes till now, and I wanted to write a thread about how the show made it quite different from the ones in Game of Thrones.

In Game of Thrones's 76 episodes, only four were directed were women. Only this season of #HouseoftheDragon, four (announced) ones have been directed by Clare. GoT infamously had an extremely unsafe environment for actresses when they shot nude scenes —https://t.co/K3HzZ67lee

One of the Twitter users pointed out that the camera work in episode 4 of House Of The Dragon had no titillation, lingering, or extra zoom shorts on women’s breasts. And that in a way conveys the message that sex is about intimacy but intimacy is more than just objectifying (or showing) the body.

When a main female character eventually has sex, her body isn't framed in a lascivious way – she's young, zealous, rebellious. her body language and the way her body is shot conveys that. simultaneously, we see another character going through the motions without feeling anything-

The user writes, “When a main female character eventually has sex, her body isn’t framed in a lascivious way – she’s young, zealous, rebellious. her body language and the way her body is shot conveys that. simultaneously, we see another character going through the motions without feeling anything-“. They further point out that this is exactly why female directors and intimacy coordinators are required. The user says that just like in the episode of House Of The Dragon, the woman director, Clare Kilner, used sex as a meaningful plot where she showed character development without exploiting it.

and we feel the discomfort there too. without too much body exposition. this is the importance of female directors and intimacy coordinators. not only you make it safer for your actors (with some of them being quite young), you make sex a meaningful plot point without exploiting.

In fact, many of the fans took to their respective Twitter to hail the woman director in House Of The Dragon for showing the sex and nude scenes with so much respect and care. Check out some of their tweets:

Good thread! I'd also add that the scene where female lead kinda semi-coerces a male character into having sex, the complex power imbalance + his struggle bw lust and sense of duty and free will is vv sensitively shown. Meanwhile GoT almost always depicted sex as a male victory.

Female gaze won in this episode. And I’m grateful that the prequel will not show violent abuse towards women.

Also Read: ‘House Of The Dragon’ Ep4 Leaves Fans Wondering How Westeros Has A Better Abortion Policy Than The United States

Clare Kilner, the director of Dragon House Episode 4 is amazing!! Emotion so delicate and you can feel her protection for the actress everywhere, vivid but not pornographic#HouseOfTheDragon pic.twitter.com/VwezuCE2kd

And if you ask me, having a female director directing the sex and nudity scenes in House Of The Dragon makes all the difference in the world – the very major difference being that there is no violent gaze or unnecessary violence on women’s bodies. In fact, I’d say that the sex/nudity scenes move the plot ahead rather than just be the padding.

Sex/Life On Netflix Isn’t Perfect. But Here Are 5 Things It Got Right About Female Pleasure, Marriage And Friendship