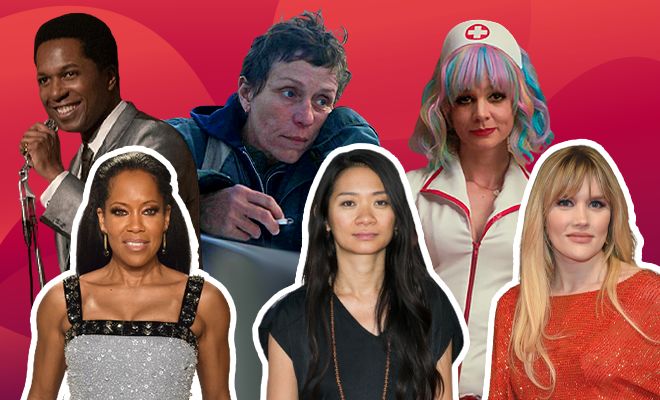 For The First Time, 3 Of The 5 Golden Globes 2021 Best Director Nominees Are Women. Here’s Why It’s A Bittersweet Feeling!

On Wednesday, the nominations for the 78th Annual Golden Globe Awards were announced, honouring the best from the past year in film and television. The Golden Globes are bestowed by the Hollywood Foreign Press Association (HFPA) which comprises 99 members that are all journalists and media professionals from different countries who write about Hollywood. Golden Globes are often considers a good predictor for the Academy Awards happening soon after. And if that is indeed the case, then the Globes have made history worth replicating. This year, of its five Best Director – Motion Picture nominations, three are women filmmakers—Regina King (One Night In Miami), Emerald Fennell (Promising Young Woman) and Chloé Zhao (Nomadland).

Regina King is already a three-time Golden Globe nominee and one-time winner, bagging the award for Best Supporting Actress – Motion Picture in 2019 for If Beale Street Could Talk. One Night In Miami, which is about a fictionalized meeting of Malcolm X (Kingsley Ben-Adir), Muhammad Ali (Eli Goree), Jim Brown (Aldis Hodge), and Sam Cooke (Leslie Odom Jr) on one night in February of 1964, is Regina King’s directorial debut.

To hit it out of the park in her first ever film as a director speaks volumes of King’s talent. And the HFPA is just one amongst several other award organisations, like the Venice Film Festival, that have recognised her work. One Night In Miami has two more Golden Globe nominations— Leslie Odom Jr for Best Supporting Actor –  Motion Picture and him with Sam Ashworth and Best Original Song.

The film has already won the Golden Lion at the Venice Film Festival and the People’s Choice Award at the Toronto International Film Festival, becoming the first film to have won both these top honours. It has also been named one of the ten best films of 2020 by the US National Board of Review, as is clearly a favourite to win other top awards too, including Golden Globes Best Motion Picture. Chloé Zhao is also helming Marvel Studios’ biggest film release in MCU Phase 4—Eternals.

Also Read: Wonder Woman 1984 Director Patty Jenkins Was Ready To Walk Away Over Pay Disparity. Can We Please Pay Women Their Dues?

Another actor-turned-filmmaker, Emerald Fennell is known for writing Killing Eve Season 2, which earned her two Primetime Emmy nominations. She has written, directed and produced Promising Young Woman, which stars Carey Mulligan  Bo Burnham, Alison Brie, Clancy Brown, Jennifer Coolidge, Laverne Cox, and Connie Britton, and is the story of a woman who sets out to avenge her best friend who was a victim of rape.

Having won major acclaim, including being named one of the ten best films of 2020 by the National Board of Review, Promising Young Woman has four Golden Globe nominations, including Best Picture and Best Actress. Emerald Fennell is nominated for both Best Director and Best Screenplay.

In the 77-year history of the Golden Globes, only five women directors have been nominated for the Best Director award and only one (Barbra Streisand for Yentl) has actually won it. Barbra Streisand has been nominated twice, for Yentl and The Prince of Tides. Even Kathryn Bigelow has two nominations, for The Hurt Locker and Zero Dark Thirty. The other three female best director nominees include Jane Campion for The Piano, Sofia Coppola for Lost in Translation and Ava DuVernay for Selma. In fact DuVernay’s nomination in 2015 was the last time a woman filmmaker was nominated, until this year.

What’s more, this is the first time that more than one woman has been nominated in the category in one year. And if you, like me, are too sentimental about inclusivity, then it should also be noted that of these three women, two are women of colour. Regina King is only the fifth black filmmaker to be nominated for Best Director. And if she wins, she would be the first black filmmaker to win the award. If you ask me, those are high stakes alright.

NGL, it is a bittersweet feeling. While there is the exhilaration of these firsts and the talent of fellow sisters being lauded, there’s also this tinge of sadness that it took this much time. These nominations and accolades, this recognition has been a long time coming. Before not many women filmmakers were getting  the chance to make movies, which is probably why the weren’t racking up awards either. But there have also been instances where awards have snubbed women directors completely. For the past couple of years, the HFPA has been under major flak for snubbing women directors like Greta Gerwig (Little Women), Marielle Heller (A Beautiful Day In The Neighbourhood), Lulu Wang (The Farewell) and others.

Maybe this year, they’re trying to remedy that? Although I would hate to diminish the achievements of these women to a compensating gesture on the part of the Golden Globes. I think they are nominated because they absolutely deserve it! Having watched their work, I can attest to the fact that these are indeed some of the best films to come out of 2020!

Do you remember the glorious moment when Kathryn Bigelow won the Best Director Oscar for The Hurt Locker in 2010, making her the first woman filmmaker ever to win the award? It’s been a decade to that, and sadly so far, she remains the only woman filmmaker to have won the honour. It speaks volumes about the gender disparity in award shows, but more so about the gender imbalance in the movie industry itself. And that’s not just in Hollywood, as we know quite well. However, the past few years have brought in winds of change.

2020 has seen some tremendous work by women filmmakers, from short films to feature films and series made for OTT. It pretty much feels like some kind of a lid has been lifted that was keeping their talents suppressed and now the pressure is releasing, and throwing some really good content at the audience. And we are lapping it all up. Even back home, we’ve got women behind the camera putting more women in front of the camera and telling stories with a female gaze, which TBH, is so refreshing and real.

Which makes me positive that 2021 might just be the year when women filmmakers make their presence felt with resounding wins across several major awards.

I’m keeping my fingers crossed and cheering for my sisters!