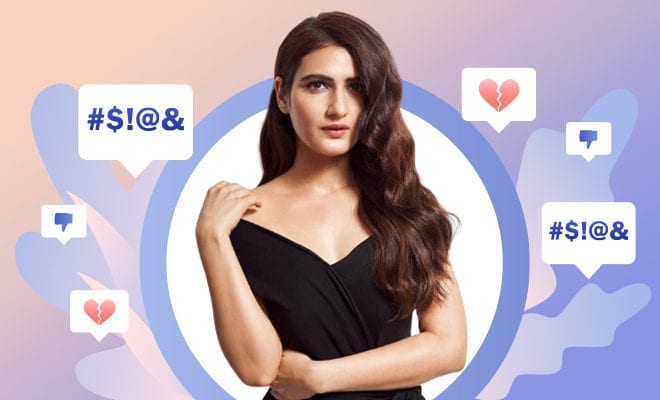 All women on social media, regardless of whether they have a private or a public profile, have to deal with one very disturbing thing. And that is men who slip into our DMs to either send unwanted NSFW pictures, say mean things or directly ask us to be their girlfriend. Although women who have their followers in millions, like celebrities, get these DMs in huge numbers. Some *may* be funny and some flattering, others are plain hurtful and frustrating. During the promotions of Netflix’s Ajeeb Daastaans, the three leads, Aditi Rao Hydari, Nushrrat Bharuccha and Fatima Sana Shaikh read out ajeeb DMs they received on their social media accounts. Along with some blunt proposals and amusing compliments, there were also some trolling comments, obviously. However, Fatima Sana Shaikh’s response to one slut-shamer in her DMs is totally winning the internet.

Fatima posted the promotional video by Netflix on her social media and captioned it, “If you thought “lukin nyc deer” are the strangest DMs one can get, let these ajeeb ones change your mind.” As she read out the DMs, there was one from a man who was a little bit too concerned about why she wears short clothes in her pictures. He asked her, “Why are you wearing such short clothes? Is it too hot in Mumbai? Or did you shop from the kids’ section?” Normally, anyone would have ignored a message like this. That’s what we think, right? That replying to them would just give them unnecessary attention. However, it’s really important to show them a middle finger with a savage response. That’s what Fatima did. She replied in a sassy way, “My Gamla, My Phool. My Body, My rules!” It’s basically saying ‘whatever I choose to wear in none of your own business’ in a hilarious way and we love it.

Also Read: Fatima Sana Shaikh Reveals That She Slapped A Man For Touching Her Inappropriately

I don’t understand people’s obsession with women and their choice of clothes. They are definitely not concerned but don’t think twice before slut shaming them on a public platform. They think it’s okay to troll a female celebrity and say whatever that comes to their mind. Every time they post a picture in slightly revealing clothes, their comment section is filled with nasty comments and slut-shaming remarks. We can only imagine the kind and number of DMs they must be receiving that are not out in the open for everyone to read. This is just one example of the kind of creepy DMs most women, celebrity or not, receive from strangers on social media. And, it’s sad.

Her fans and followers obviously loved her response. A user wrote, My gamla,my phool My body,my rule,’ I laughed so hard..” Another commented, “Fatima was so savage and so on point, loved it. It was a very interesting video.” They loved this quote so much they even won’t mind wearing it on their T-shirt. One follower requested a merch with this cool phrase printed on. They said, “Petition to print My gamla, my phool, my body, my rule on a t-shirt.” We’d sign that, so we can shut anyone who thinks we are dressed inappropriately with just a show of our tee.

Also Read: Fatima Sana Shaikh’s Reply To A Troll Who Commented On Her Body Was Savage AF!