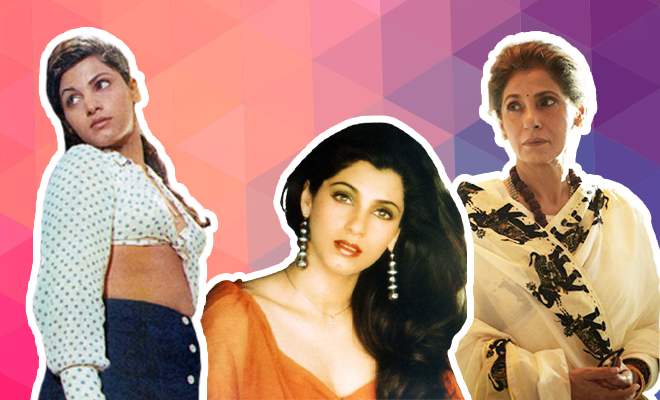 From Playful Polka Dots In ‘Bobby’ To Power Dressing In ‘Tandav’, Dimple Kapadia’s Style Remains Iconic As Ever!

Dimple Kapadia is among the handful of leading ladies of Bollywood that have ruled the cinema for more than four decades now. There was something so majestic and charming about that teenage girl who made her presence felt on the silver screen in her first film Bobby. Kapadia was merely 16 when she bagged the titular role, but created a buzz with her acting chops and a natural girl-next-door personality. She even won the Filmfare Award for Best Actress that year for Bobby. However, it was not only her charisma or natural stint with the camera that mesmerised the audience but also her impeccable style in the film that became the talk of the town.

Bobby gave us some pretty iconic fashion moments that made us pause and stare. And Kapadia became quite a trendsetter for introducing Indian women to some of the most fashion-forward styles like crop tops, sexy mini dresses and really short shorts in the 80s. Pull out your family album and I am sure you’d find your mom posing in a similar printed dress inspired by her character. True movie buffs and fashion enthusiasts would also vividly remember her polka dot tie-up shirt and black mini skirt outfit that created quite a stir back in the day. It was such a fashion hit that the print came to be known as ‘Bobby print’. Even now, it continues to be the most imitated fashion look by women.

Dimple Kapadia was one of the few actresses who could pull off even the most sexy and sultry clothes while keeping up an innocent persona on the screen. She wore a tangerine bikini in Bobby and later a black swimsuit in another movie Saagar, which remain classic examples of how she carried the skimpiest of outfits like no other. Her sartorial trajectory ranges from ultra-modern outfits to maxi dresses and exquisite sarees. Her flowy pink dress with a broad-waist belt in Ram Lakhan’s song is still one of her most gorgeous on-screen outfits. There’s hardly any style she hasn’t rocked and her broad spectrum wardrobe has only evolved with time.

Her latest role as senior politician Anuradha Kishore in Amazon Prime Video web series Tandav is demonstrated brilliantly by power dressing in traditional sarees. She is seen in handloom sarees with the pallu draped over her shoulder that displays an authoritarian appeal of the character. Her wardrobe from the series features mostly neutral toned sarees with sleek borders, motifs and minimal designs that she carries with flair only she knows.

Similarly, in Christopher Nolan’s Tenet, Dimple Kapadia made quite an impression in her illegal arms dealer role, dressed in resplendent churidar kurtas, fitted kurtas with fitted pants and shawls draped over her shoulders to add more richness to her look!

Her off-screen dressing style too embodies elegance and effortlessness. While she often gravitates towards neatly draped sarees, relaxed pants, kurta and shawls, she also steps out in ripped jeans, oversized shirts and denim jackets conveying the message that fashion has nothing to do with age and that she is the same stylish woman that set some hottest fashion trends back when she was just a teen starlet starting out in the film industry.