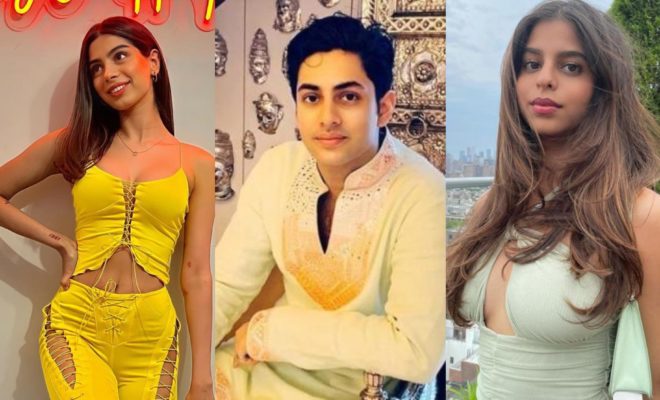 Well Indian adaptations of popular international shows, comic books and film franchises, hardly excite me, all because I know the mess that’s coming my way. But this particular one has me quite thrilled, also because the makers here are my favourite. Without playing any more guessing game, let me tell you that I am talking about none other than –The Archies. Yes, Zoya Akhtar’s upcoming directorial which is based on the famous comic series is getting a brand new Indian version and I am excited.

Starring SRK’s daughter Suhana Khan, Sridevi’s younger daughter–Khushi Kapoor and Amitabh Bachhan’s grandson– Agastya Nanda, the three young stars will make way into the film world with The Archies. While the buzz around the musical’s making has been pretty loud and clear, Zoya Akhtar made it official for one and all. In an early morning Monday post, Zoya’s professional buddy Reema Kagti shared a glimpse of the film’s clapboard as the team starts filming and wrote, “Archie’s shoot starts TigerBaby’s first solo production.” Being Reema Kagti and Zoya Akhtar’s first solo production under their label–Tiger Baby, the musical will be directed by Zoya Akhtar and is expected to release on Netflix. Congratulating the producers, Zoya Akhtar’s brother and multi-hyphenate Farhan Akhtar too shared the post on his social media handle.

Also Read: Suhana Khan, Khushi Kapoor, And Agastya Nanda Were Seen On The Sets Of Zoya Akhtar’s Musical, ‘The Archies’, Check Out The Pics

Responding to the post, Agastya’s sister Navya Nanda commented with a heart, while Agastya’s dearest ‘mamu’ actor Abhishek Bachchan reacted with multiple clapping emojis and heart. While, the roles of these respective stars is still under wraps, the internet is hoping to see Agastya as Archie Andrews, Suhana and Khushi as Veronica and Betty. Quite interesting! Announcing the production on the same, Zoya Akhtar spilled some beans about the project back in 2021. We just can’t wait to see the trio and Zoya Akhtar’s magic on the big screen.

Zareen Khan Is Kween Of Ethnic Wear
By Ritu Sanghvi
On Sep 12, 2022

Yuvika Chaudhary And Prince Narula’s Jodi Is All Hearts!
By Pragya Dubey
On Sep 16, 2022

Young Actresses Who Are Taking Over The Film Industry:
By Mehak Walia
On Aug 12, 2022