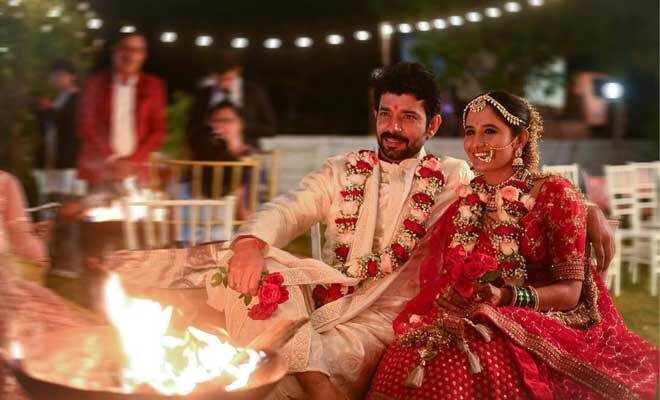 Love is in the air and so are weddings. Bollywood actors are one after the other getting married and they are giving us such major couple goals! After Rajkummar Rao and Patralekhaa and Aditya Seal and Anushka Ranjan got married, it is now Vineet Kumar Singh who got married. Yep, the Bard of Blood actor recently got married to his long-term girlfriend and actress Ruchiraa Gormaray. Vineet Kumar Singh shared the good news with his followers on Tuesday along with their wedding pictures. And they look super adorable, to say the least.

Bollywood actor Vineet Kumar Singh and Ruchiraa Gormaray dated for eight years before they got married on Monday, November 29th, 2021 in Nagpur. The two tied the knot in both Maharashtrian and North Indian rituals.

Vineet Kumar Singh took to his Instagram on Tuesday to reveal the news of his wedding. In his post he wrote, “29/11/2021 Holding your hand I came so far. Feeling truly blessed to have you in my life! @ruchiraagormaray Thank you everyone for your love and blessings❤️”

The picture shared by the Mukkabaaz actor showed him dressed up in a white traditional sherwani and Ruchiraa in an all-red wedding lehenga. The two looked so happy and adorable together.

As per Hindustan Times, the Gold actor said, “It was a very intimate affair, with my side and her side of the family, and close friends. We both did the planning, she did more than me, I was always there to support her. The rituals followed were both Maharashtrian and North Indian. It was all in one ceremony.”

Speaking about his relationship with actress Ruchiraa Gormaray, Vineet Kumar Singh said that they kept their professional lives separate and were still together. He also added that they had a lot of things together and that she has been by his side no matter what.

And if that isn’t heartwarming, then I don’t know what is? Watching two people who love and support each other finally tie the knot is something special and even magical (I dare say).