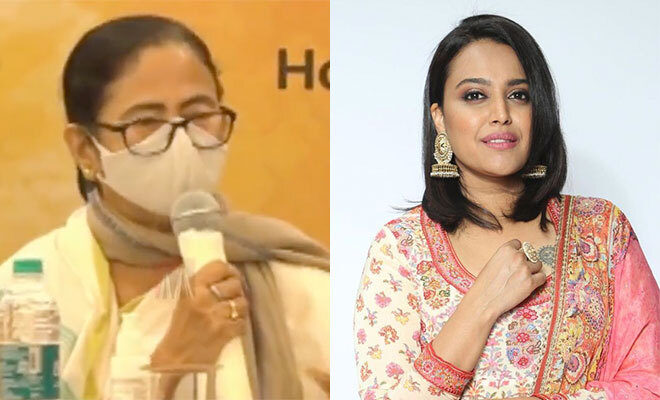 It is not uncommon for Bollywood actresses to join politics once they take a break/retirement from the entertainment industry. We have Jaya Bachchan and Hema Malini as examples and the way Kangana Ranaut is going, I think she too will be changing careers real soon. Personally, I think one should join politics not just because they are strong-willed or opinionated, I believe that they should join it if they are not afraid of expressing their opinions out loud and fight for what they believe in. In fact, some of the actors who I believe would make good politicians are Taapsee Pannu and Swara Bhasker. I mean, both of them are strong, opinionated, and fearless when it comes to voicing their thoughts. And I’m not the only one who thinks Swara Bhasker would make a good politician, even the West Bengal Chief Minister Mamata Banerjee agrees. In fact, she even asked the actress why she doesn’t join politics. Now, that’s an interesting thought, isn’t it?

Recently, the West Bengal Chief Minister Mamata Banerjee visited Mumbai where she held a meet and greet, where even Bollywood actor Swara Bhasker was present and raised some valid and serious questions about the unjustified events that had taken place in the last few months. Other than Swara, other personalities who were present included Mahesh Bhatt, Javed Akhtar, Richa Chaddha, Shatrughan Sinha, and many others.

Swara Bhasker who was present in the audience addressed Mamata Banerjee and spoke to her for around 4 minutes. At that time, the actress brought out the comedian Munawar Faruqui. The comedian was jailed earlier this year for hurting Hindu sentiments with his jokes and also has been forced to cancel his shows because he has gotten threats of vandalism. In her supportive argument, the Veere Di Wedding actress said that many of the comedians have risked their careers and their livelihood to ensure that the resistance stays alive.

As per reports, the opinionated and fearless Swara Bhasker impressed the West Bengal Chief Minister with her arguments that she patiently listened to. Once the actress was done with her arguments, Mamata Banerjee asked, “Why don’t you join politics? You’re a tough and strong lady.” Everyone present applauded in support of the minister’s question.

Also Read: In The Midst Of The Political Turmoil, Swara Bhasker Is The Only Star Taking A Stand, And We Laud Her

Later, while speaking with ThePrint, Swara Bhasker said that it was “gracious” of her to think that she was a good candidate for politics. She further added, “My question to her was about the misuse of draconian laws, especially the UAPA, and I was glad to hear her assure everyone that she will not stand for the misuse of that law.”

I’ve always liked Swara Bhasker. Not just because she is a fine actress, which she is, but also because where most actors would like to turn a deaf ear, she is the one to call out injustice when she sees it. We need more celebrities like her if you ask me.

Swara Bhaskar Talks About How Difficult It Is To Rent A House In Mumbai As A Single Girl. Why Are Single Women So Intimidating?