Mahesh Bhatt’s Birthday Celebration Was All About ‘Family’ As Alia Bhatt And Ranbir Kapoor Join Celebration!

Birthday parties make for the perfect occasion for family gatherings. Having your favourite cousins around on this big day is quite fun and of course, you can’t forget the tonnes of pictures and videos you end up taking on this occasion. Well, celebrity fam-jams are one thing fans look forward to the most as they get to see unseen pictures of their favourite stars chilling with their family members. Recently, it was Alia Bhatt’s father Mahesh Bhatt’s birthday and the Bhatt household had gathered for a celebration. Soni Razdan took to her Instagram to share a picture of them all gathered on the occasion which was also attended by Ranbir Kapoor.

In the picture, the Bhatt parivaar was seen smiling widely for the camera. Birthday boy Mahesh Bhatt was sitting right in between, with Shaheen Bhatt sitting to his right and Soni to his left. Alia and Ranbir were also sitting on the couch on either side while Pooja Bhatt knelt on the floor. Soni Razdan shared the picture with the caption “It’s all in the family.”

It indeed is a rare picture where fans got to see the entire Bhatt family together. Fans rushed in to shower love on the post the moment it was dropped. Even the Bhatt’s samdhanji AKA Neetu Kapoor dropped a comment on the post. She commented by using a red heart emoji and a celebration emoji. Fans also dropped hearts on the post. 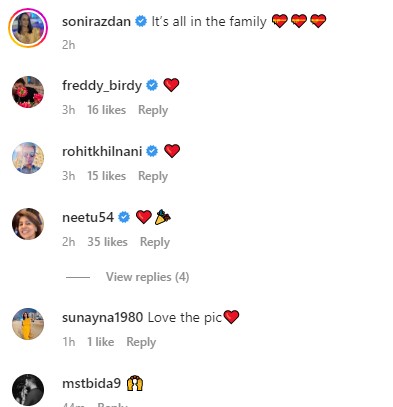 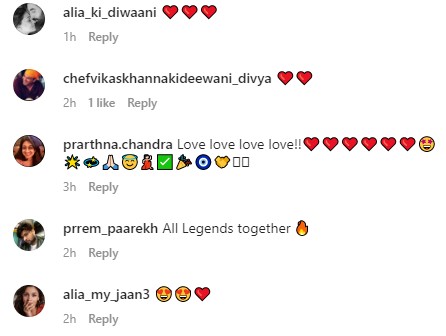 It looked like the family had a great time spending time with each other and it also calls for a double celebration as Alia and Ranbir’s film Brahmastra is doing so well at the box office.

Also read: ‘Brahmāstra’ Fans Theorise That Alia Bhatt Is The Jal Astra Instead Of Deepika Padukone

On the work front, currently, Alia Bhatt and Ranbir Kapoor are riding high on the success of their fantasy epic film Brahmastra. The film has gone on to do exceptionally well at the box office worldwide and people appreciated director Ayan Mukerji’s attempt at making a film this grand.