In Her Latest Picture Sonam Kapoor Proves Pregnancy Is Not Always Rainbows And Sunshine!

Pregnancy is the most special phase in a woman’s life but it also comes with a lot of pain and well, everyday struggles. The pain and difficulties of pregnancy are felt more in the later months of the phase. Sonam Kapoor who is soon to be a mommy has shared every part of her pregnancy journey with her fans and followers. Many tips could also be taken from the healthy life that Sonam maintained during her pregnancy. The Neerja actress is currently in the later phase of her pregnancy and has now given us glimpses of the problems faced during these days.

On August 4, Thursday, Sonam Kapoor took to her social media account to share a picture of her swollen legs. In the picture shared by Sonam, you can see the swollen legs of Sonam who is wearing floral pajamas, With the picture, Sonam also wrote that “Pregnancy is not pretty sometimes.” Clearly, Sonam is showing every side of the pregnancy and not just making it look like a very happy phase all the time.

Sonam and Anand Ahuja are delighted to welcome their first baby. The couple also threw a grand and perfect baby shower in their London home and it made headlines. Now the days of getting the newborn into the world are coming closer. A few days back Sonam had shared her pictures doing some home workouts and eating healthy food. Her babymoon pictures from Italy were also all over the internet. 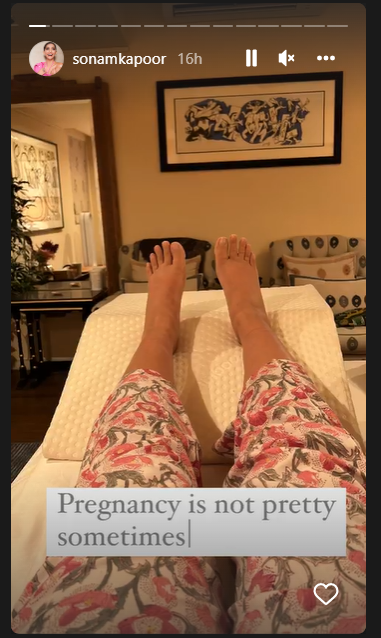 Also Read: Will Cousins Arjun Kapoor And Mom-To-Be Sonam Kapoor Grace The ‘Koffee With Karan’ Couch? Here’s All We Know

Well, Sonam Kapoor has definitely lived and enjoyed every part of her pregnancy journey but it also is great that she is giving the not-so-pretty side of the picture as well.