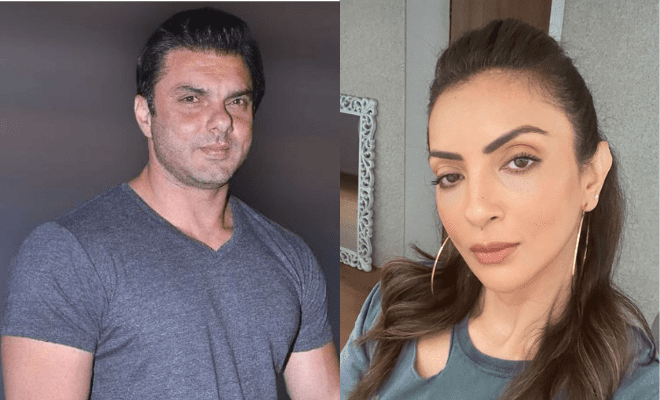 A shocking piece of news was heard today. It appears there was trouble in paradise for Salman Khan’s brother Sohail Khan and his wife Seema Khan as they have recently filed for divorce. The reason for their split has not been revealed yet.

As per a report by The Times Of India, a source who was from the court has revealed that Sohail Khan and Seema Khan were present ta the court today to file their divorce papers. There appeared to be no tension between the two and rather were friendly towards each other. The ex-couple was together for 24 years now. Pictures of the two at the family court have surfaced on social media as well. They are yet to release an official divorce statement yet.

In the pictures and videos that have been shared on the paps’ social media accounts, Seema is seen dressed in green tracks and a white t-shirt whereas Sohail Khan was dressed in a black t-shirt and jeans.

Sohail and Seema Khan got married in 1998 and they have two kids together Yohan and Nirvaan. It was also shown in the Netflix show The Fabulous Lives of Bollywood Wives that Sohail and Seema were living in separate houses while their children seen coming came back and forth from their parents’ place. This led the audience to further believe that Sohail and Seema are not living together.

Also read: Kangana Ranaut Thanks Salman Khan For Promoting ‘Dhaakad’, Says He Has A “Heart Of Gold”

In one of the scenes of the show, Seema has gone on to say that hers and Sohail’s is not a ‘conventional marriage’ but they are a ‘unit’ together.