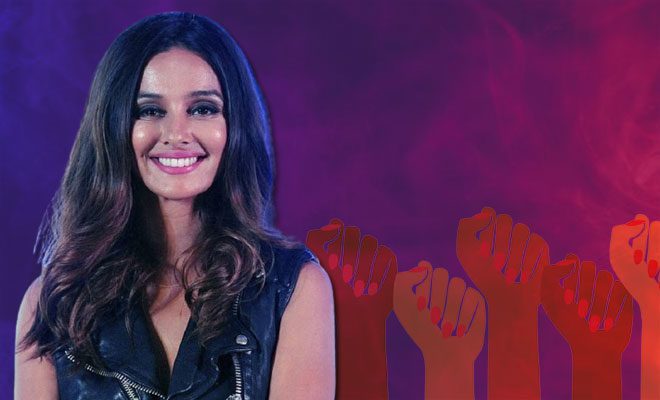 As someone who is constantly reading news coming out of our country and the world, I am in constant fear of feeling whiplashed. On the one hand, women are making tremendous progress in fields that they couldn’t even be a part of until a few years ago. We’re winning medals at the Olympics, pioneering in STEM, art, literature, making a mark in business, politics and entertainment, and at the same time, raising our voices against social injustice and environmental issues. But on the other hand, women are being oppression in some parts of the world without even basic agency, and facing violent crimes like rape, murder, sexual harassment, infanticide and more. It feels like we’re doing so much to foster women empowerment. And yet we aren’t doing enough. That’s exactly the sentiment that Shibani Dandekar echoed in a recent interview.

The 41-year-old model, actor, singer and anchor, when asked about it during an interview, said that women empowerment is like a double-edged sword. We’ve done so much and yet there is so much still to do. And isn’t that true? Is it ever going to be enough when there is so many generations worth of oppression too overcome?

She told Hindustan Times, “You kind of have to think of all the progress that we have made over the years, and then sometimes you think, ‘man, we are just not moving fast enough.”

Also Read: Shibani Dandekar Spoke About How She Is Scared For Her Safety Now. We Totally Relate To That.

For me, thinking about what all still remains to be done and whether it is working or not triggers major stress. Look around us, despite all the government policies and programmes by law enforcement, there is no light at the end of the dark tunnel sometimes. But Shibani believes that we must focus on the positives rather than thinking about whatever is holding us back because there’s miles to go and the future generations of women are counting on us to pave a better way for them.

“Should this be a fight at all? No, it absolutely shouldn’t. But we are making progress. We have been given a voice. We have been given a platform. We need to do whatever it is that we can. We are paving the way for the women that come after us. There’s a certain sense of responsibility,” she says.

Shibani Dandekar then concludes by saying, “We all ask ourselves, why do we even have to deal with this? But then we have to think about all the women that came before us for much tougher battles. Take some sort of comfort in knowing that it’s a little bit easier for us today, and be a bit appreciative of that”.

I almost agree with what Shibani has to say. While there’s no way we should be ignoring the bad that has been happening to the women around us, and while it is not possible to completely overcome the stress of nothing ever being enough, we do need to compartmentalise sometimes and focus on the positive while ploughing forward to sow the seeds of women empowerment.