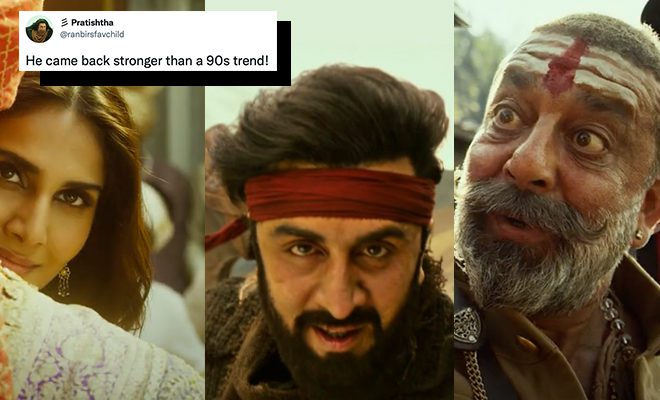 Ranbir Kapoor has been missing from the big screens for a while now. Trust me, his absence is more than felt by his fans who are eagerly waiting for his movies to release. What has them and me keeping calm is the amazing lineup he has – Brahmāstra, Shamshera, Animal, and the untitled film with Shraddha Kapoor. Yep, it is safe to say he’s coming back with a loud bang. And so far, the trailers of his films have created the right kind of buzz. After Brahmāstra, it is the makers of Shamshera that have dropped its trailer and Ranbir Kapoor definitely has stolen the show – not just with his never-seen-before look, but also with his action moves. And don’t even get me started on Sanjay Dutt killing it with his menacing smile.

On June 24, the makers of Shamshera starring Ranbir Kapoor, Vaani Kapoor, and Sanjay Dutt, just dropped its trailer and I’m loving it all. From Ranbir’s looks to the fighting scenes – fans are gushing about it all.

A father’s legacy. A son’s destiny. The legend of SHAMSHERA is here, watch the #ShamsheraTrailer NOW. Releasing in Hindi, Tamil & Telugu. Celebrate #Shamshera with #YRF50 only at a theatre near you on 22nd July. pic.twitter.com/bdDVKePzFs

Sharing the trailer, Yash Raj Films’ official social media accounts wrote, “A father’s legacy. A son’s destiny. The legend of SHAMSHERA is here, watch the #ShamsheraTrailer NOW. Releasing in Hindi, Tamil, & Telugu. Celebrate #Shamshera with #YRF50 only at a theatre near you on 22nd July.” Even Alia Bhatt like a proud wife shared the trailer on her social media.

The Shamshera trailer opens with Ranbir Kapoor playing a decoit named Shamshera who is stealing from the rich and giving it to the poor. He is seen playing the leader of the tribe who is taking ahead his father’s legacy (PS the father is also played by him – yep, double role). And then enters Sanjay Dutt who plays a corrupt cop that turns the people of the tribe into slaves.

Needless to say, the trailer has killed it with the fans and this is what they have to say about it:

AAAT….. This is CRACKER of a Trailer. The single screens will go berserk. Mazza Agayaa. Big screen pe toh aur bhi zyada. Get ready for a BIG day one on July 22. #RanbirKapoor as #Shamshera takes on #SanjayDutt as #ShudhSingh. #ShamsheraTrailer https://t.co/gUyqDwP1AX

Shamshera is all set to release on July 22.