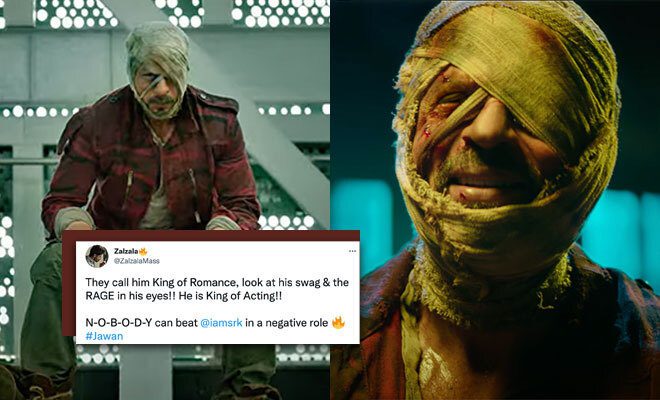 You know, I love to watch films of all languages because cinema has the power of connecting people from different countries and ethnicities through storytelling and I think that’s quite magical. However, Indian cinema will always be my priority because hu toh main Indian hi na. And if you like Indian cinema, there’s no way you haven’t watched any Shah Rukh Khan film as he is literally the ‘King of Bollywood’ and now, he’s back with another film titled Jawan. Today, we got the teaser of the film and let me tell you, fans can’t get enough of Shah Rukh Khan’s new look and iconic Don laugh. He’s back with a bang y’all!

On Friday, Shah Rukh Khan blessed us by releasing the teaser of his upcoming film Jawan. In the teaser, the Raees actor can be seen surrounded by weapons as he is covering his face and hands with bandages, he’s looking so scary yet so handsome! The film is directed by Atlee Kumar and it also features actress Nayanthara. As soon as the trailer got released, his fans flooded Twitter to express their excitement and they are in love with Shah Rukh Khan’s new scary avatar and his iconic Don laugh, we totally agree with them.

Yeah, this is totally true.

They call him King of Romance, look at his swag & the RAGE in his eyes!! He is King of Acting!!

N-O-B-O-D-Y can beat @iamsrk in a negative role 🔥 #Jawan pic.twitter.com/iJ7LiGyTG8

Everyone is expecting #Pathaan & #Dunki to deliver, I get it but #Jawan seems like MASS written all over it!

This one is going to be epic 👍😻👍@Atlee_dir @iamsrk @anirudhofficial brother bgm in teaser is killer… Jus can't wait for 2023 to be explore with the badshah @iamsrk all the very best @NayantharaU @RedChilliesEnt @gaurikhan and entire team of #JawanTeaser #Jawaan https://t.co/xXQEmTZU8U

#Jawan is giving us major #Fauji nostalgia. Most Explosive Collab ever @iamsrk and #atlee This is gonna be 💣 🔥
2023 belongs to #SRK #Pathan #Dunki #Jawan 👊🏼 https://t.co/6TpYSIL2qy

Also Read: Shah Rukh Khan And Rajkumar Hirani Announce Their Upcoming Movie ‘Dunki’ In The Most Hilarious Way Ever

Meanwhile, Jawan will release in theatres on June 2, 2023. I can’t wait to watch this film, to be honest!