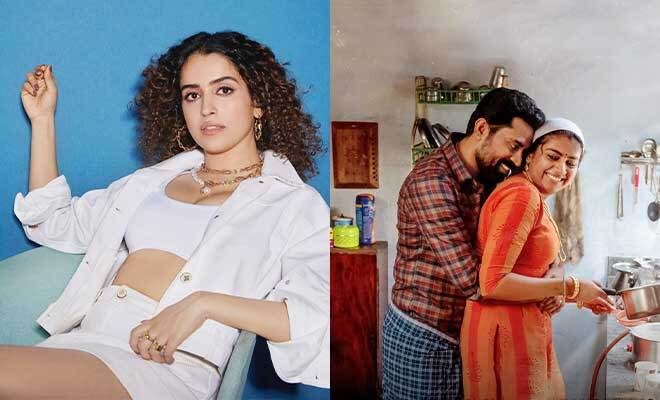 Sanya Malhotra To Reportedly Headline Hindi Remake Of Malayalam Film ‘The Great Indian Kitchen’. This Has Us Excited

One of the many perks of having Mallu friends is that they not only introduce you to amazing food but also movies. One such movie that I was introduced to is the critically acclaimed The Great Indian Kitchen. The movie tells a story of a newly-wed woman who is struggling to be the submissive wife that her husband, his family, and society expect her to be. This was one of my favourite movies since it powerfully broke through the patriarchy and also took a dig at our man-made institutions of marriage, family, and religion. But why are we talking about it? Well, because rumours are going around about how there is going to be a Hindi remake of The Great Indian Kitchen which reportedly will be starring Sanya Malhotra as the lead.

Sanya Malhotra who is known to experiment with her film choices is now reportedly going to be playing the lead in the Hindi remake of the Malayalam film, The Great Indian Kitchen. She will be playing the role of the newly-wed wife in the movie that was originally played by Nimisha Sajayan.

Also Read: Desi Women Get Candid About The Ugly, Misogynistic Side Of Indian Matrimony. It’s Why Indian Women Are Scared To Get Married

The rumours of Sanya Malhotra playing the lead in the Hindi remake of The Great Indian Kitchen came right after the news that stated that Vicky Bahri and actor-producer Harman Baweja reportedly acquired the Hindi remake rights of the Malayalam film.

In fact, a source close to the project that might have Sanya Malhotra in the lead said, “Several actors are being considered for the lead roles in the Hindi remake of Nimisha Sajayan and Suraj Venjaramoodu starrer ‘The Great Indian Kitchen.’ Since the film has received a lot of acclaim, actors who would resonate with the characters are of most importance.” It also seems as though the makers are planning to start the project by mid-2022. They will also be officially announcing the cast when the Hindi remake script of the movie is finalised.

You know what I love about this news is that even though we have OTT platforms that have largely reduced the language barrier, I believe that we need such films to come in mainstream Bollywood so that the subject of gender equality can be poached on a large scale. A movie like this that deals with what most Indian women go through is something that shouldn’t be taken lightly and it’s high time we shed light on the condition of homemakers in India.