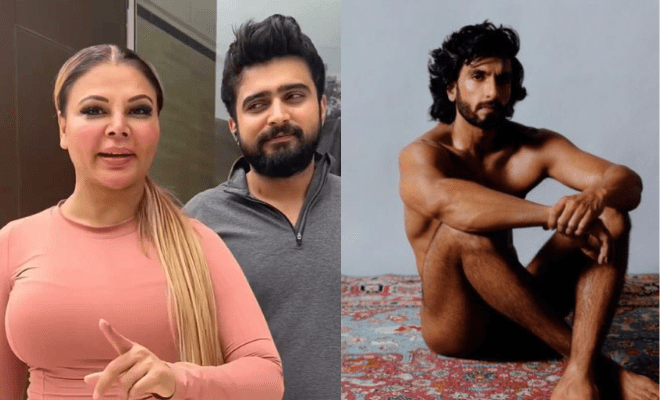 Ranveer Singh’s recent nude photoshoot set the Internet on fire. Twitter has been abuzz since morning with people tweeting about him taking the plunge. While many of them have showered love on Ranveer for flaunting his masculinity while many others went on to troll him for his choice. Amid this, Rakhi Sawant has come to his defence and asked people to not troll him. She also went on to joke about why Ranveer Singh posed nude!

Rakhi Sawant and her boyfriend Adil Khan were spotted by the paparazzi, and they asked her what she thinks of Ranveer Singh’s photoshoot. To this, she replied by saying that he is not naked in the pictures, but rather the people’s eyes are naked. She also jumped to his defence and said that nobody can talk bad about him including her boyfriend Adil. The photographers also teased her by asking what if Adil shares such pictures in the future and rakhi replied by saying, “Isko dho daalungi main.”

Rakhi Sawant also spun an elaborate story about why Ranveer posed nude for the pictures. She said that he was feeling hot and had left his clothes on the floor to go have a bath. But a monkey came in and took his clothes so what is he supposed to do in that situation. YES! She said this! She also gave an explanation that he posed for the camera nude because he had nothing to do in the meantime.

Also read: Ranveer Singh Poses In All His Glory In Recent Photoshoot, But Unsurprisingly, Desi Twitter Feels Threatened By His Masculinity!

We stan Rakhi standing by Ranveer even when half the Twitter users went ahead to troll him! Ranveer Singh paid tribute to the American actor Bert Reynolds with his nude photoshoot and interview with the New York-based Paper magazine.