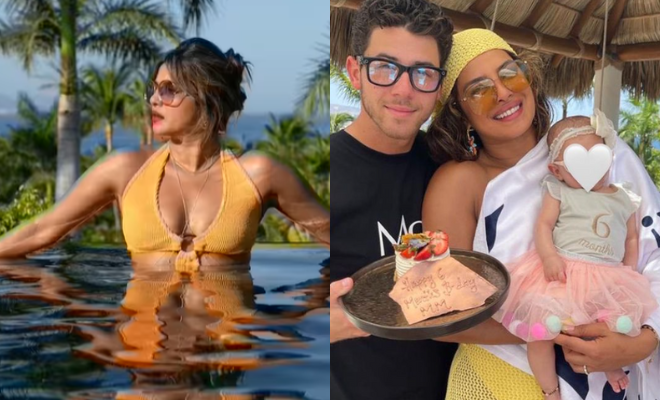 Priyanka Chopra’s Birthday Party Was All About Masti In The Pool, Good Food And Fun Time With Close Friends And Family!

Global star Priyanka Chopra celebrated her 40th birthday on July 18 with much dhamaal and masti! After her husband Nick Jonas dropped a couple of pictures on his social media giving us a glimpse of the birthday party, we were waiting for Priyanka herself to share pictures and videos of the same. Granting us that wish, she shared a birthday photo dump along with a reel on her Instagram handle which made us vicariously be a part of her birthday celebration because obviously none of us were invited. *sigh*

The video that PeeCdee shared first saw her and Nick chilling in the pool and spending some quality time together. We also saw how there was a beach party where all the guests had great fun. And of course, how can forget the food? We could see glimpses of the cake, the dinner table set for all the guests to gorge on all that yummy food as well! One cute thing that caught our attention in the video was how Nick and Priyanka’s mom Dr Madhu Chopra were clicked dancing together. How sweet is that! The Desi girl shared the video with the caption, “Just a girl and her birthday squad!”

The photo dump that she shared also saw Parineeti Chopra in one of the pictures enjoying herself with her elder sister on her big day in the pool. She also shared an adorable picture of her with Nick while holding her munchkin Malti Marie in her arms. Priyanka had also penned a lengthy caption for the post wherein she wrote, “So grateful and thankful to be surrounded by so much love and to be able to spend time with my nearest and dearest. (Even though a lot of them flew in from very far).” She also thanked Nick Jonas for organising this grand birthday celebration.

They all had a blast at the party!

Priyanka Chopra Reacts To People Pointing Out Nick Jonas’ Love Handles. Did The Internet Decide To Body Shame Him?