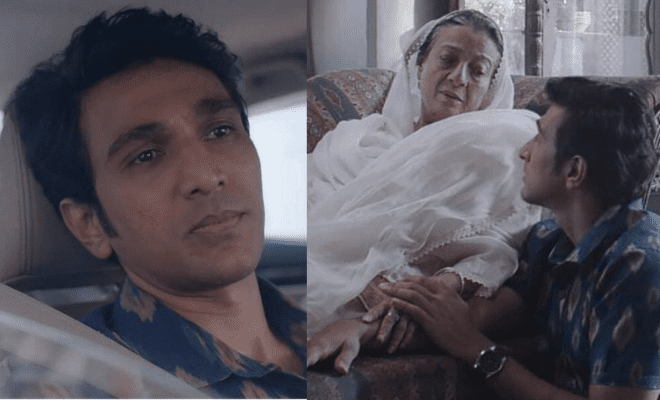 If you want to watch some of the mushiest and heart-warming love stories, then Modern Love is the perfect choice for you. After New York, Modern Love has now taken love stories from India’s dream city, Mumbai. And one of the love stories is Baai starring the Scam 1992 star Pratik Gandhi. In the story, he plays a closeted gay man who has taken up the task to come out to his grandmother who he lovingly calls Baai, which is played by senior actor Tanuja. In a recent interview, Pratik Gandhi opens up about his role in this delicate love story and also what it was like working with someone as senior as Tanuja.

In the interview, Pratik Gandhi admitted that in the past he’s always ended up playing really intense roles and so when the audience saw him in a different light in the trailer they, were pleasantly surprised. He says that the most fun part for him as an actor is when he gets to experiment.

Pratik Gandhi goes on to say that as an actor he loves experimenting as much as he loves expressing complex human emotions. He said, “We don’t get such roles often and the idea of breaking the barriers in the audience’s mind was so exciting. The perception that I have, no one really expected me in this kind of a role.”

When asked if the title Baai was hint at the lead’s sexual orientation, Pratik Gandhi kept the mystery alive by saying that it was open to interpretation. However, he added that the team were extremely sure that they wanted to tell a very realistic tale to the audience. In simple words, he said that they wanted the love story to be “gender agnostic” and that the love that they were trying to showcase should be felt by audiences even if they remove the whole gender aspect from it.

The actor further went on to say that working with Hansal Mehta for him was like coming back home. In fact, he even went on to talk about his Modern Love Mumbai co-star Tanuja. Speaking about her, Pratik Gandhi said, “She is what charisma is described as. She just lights up the screen. The first that we had together, we had to go up almost four flights of stairs. The building was without a lift and quite old, with steep stairs. I thought she must have got tired but as the camera started rolling, her energy level was on a different high. I just couldn’t take my eyes off her.”

Furthermore, the actor went on to talk about what love means for him in these modern times to which he said that it was one of the simplest emotions that have complications constructed around it. And that the love story he idolised was the one of Radha-Krishna.