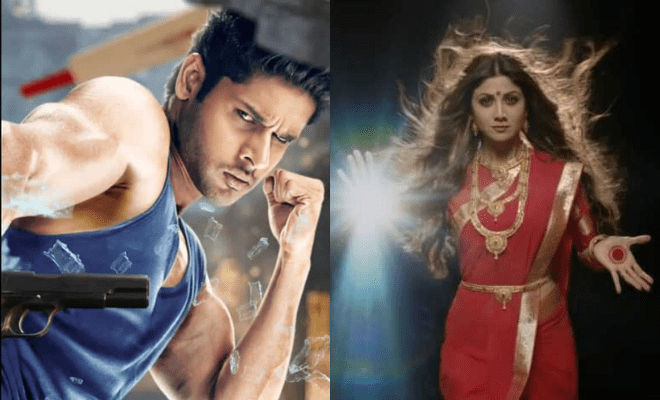 Joining the list of movies that are set to release next month, in June, is none other than Nikamma. An action packed entertainer helmed by Sabbir Khan and stars Abhimanyu, Shirley Setia, and Shilpa Shetty as leads. Ever since the teaser was dropped, I was curious to know what it was about because I saw Shilpa Shetty in a supervillain costume. Yep, that left me confused too. However, now that the trailer of Nikamma has dropped and I have watched it a couple of times, I have way more clarity.

The makers of Nikamma just released their trailer and it is sure to remind you of a typical 70s Bollywood movie. The trailer begins with introducing Adi, the character played by Abhimanyu, who is the epitome of ‘nikamma’. He then meets a woman, Shirley Setia, who instantly falls for him hard. The film also reinvents the song ‘Nikamma kiya iss dil ne’ that hits all the right nostalgia chords.

Also Read: ‘OM: The Battle Within’ Teaser: Aditya Roy Kapur Is Raising The Temperature But Is It Just Another Mindless Bollywood Action Movie?

However, things change in the second part of the Nikamma trailer when we see Shilpa Shetty aka Avni, a superwoman, entering earth and making Adi change his slacker ways. She gets him to do all the household chores and even forces him to take responsibilities. He describes her as a ‘gorgeous villain who is a mix of Thunder Woman and Manjulika’.

The Nikamma trailer then shows Adi being transformed into a 70s Bollywood hero who comes to protect Shilpa Shetty when she is threatened by a hitman. The rap and typical filmy dialogues give the movie a very old school Bollywood vibe.

Produced by Sony Pictures International Productions and Sabbir Khan Films, the movie is a mass, family entertainer that is set to release in theatres on June 17, 2022.

Priyanka Chopra Beats The LA Heat In Black Bikini While Grooving To 90s Bollywood Hits. Now, That’s How You Summer.