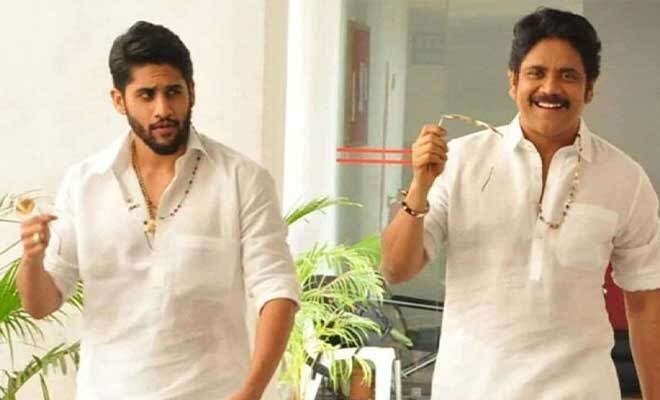 I think we can all agree that cinema as a whole but Indian cinema still is very much affected by the male gaze. Oversexualising and fantasising of women, portraying them as weak and helpless are just a few examples of how women tend to be perceived in Indian cinema. It is only recently that women have been getting more central or powerful roles. Nagarjuna Akkineni and his son, Naga Chaitanya were asked about the same by interviewer Anupama Chopra as they answered why the Telegu film industry seemed to come off as sexist.

Nagarjuna Akkineni and Naga Chaitanya said that many aspects of the Telegu film industry might come off as sexist as a lot is lost in translation. They said that similar things happened when Punjabi songs were literally translated. Interviewer Anupama Chopra called the two men, “two leading men with massive clout in the business,” and asked them why the lyrics of Telegu songs be perceived as sexist.

Nagarjuna said that he has tried the discuss this phenomenon with others and came to the conclusion that Telegu is a language that sounds sexist when translated literally. Nagarjuna used his upcoming movie Bangarraju as an example and said that most songs in the movie are derived from folklore and translating it literally would alter the true meaning of it. However, he did admit that some song lyrics can be sexist because “the world is not a perfect place.” Not a valid excuse but okay. He also offered to break the lyrics down and said that things have changed in the recent years and he isn’t completely wrong.

Nagarjuna also said, “In the next five to ten years, you need equally strong woman character now. Without that, it’s not going to work because of the woman power rising. They are asking questions, which is fantastic. This is what I noticed in early 60s and 70s. My father’s (Akkineni Nageswara Rao) films had incredibly strong male and female characters, which I feel is going to come back.” Chaitanya then said that he wouldn’t allow there to be a negative portrayal of women and society. Nagarjuna agreed with his son and said that boundaries differ for different people.

While I do agree with the fact that a lot can be lost in translation, I also believe that in the Indian film industry, the portrayal of women and romance can be pretty damaging and not everything can be blamed on just mistranslation. However, Nagarjuna Akkineni and Naga Chaitanya’s openness to talking about the problem and working on it is promising.