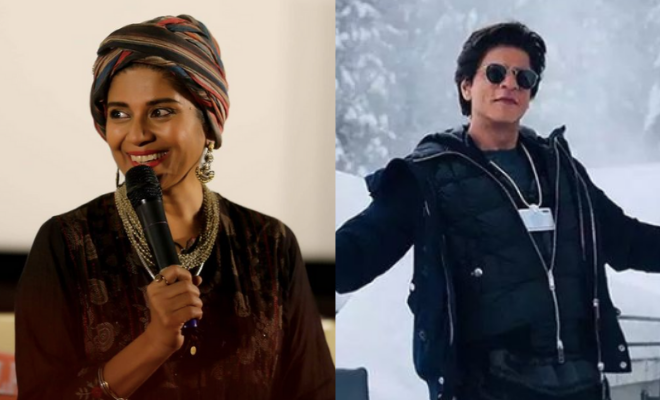 Shah Rukh Khan is not only the king of romance in Bollywood but he’s also every 90s kids’ hero. From his action sequences in Main Hoon Na to his entry in Kabhi Khushi Kabhie Gham, he’s the one reel life hero that has won our hearts. I’ve always dreamt of meeting my own real-life hero who is just like SRK. I mean c’mon! His entry is always bomb, he sings and dances for his girlfriends, his proposals are epic and he’s emotional! He even cries and that’s more than I can say for the men I know in real-life (clearly, I’m not hanging with the right crowd). And I can bet that there are many other girls (90s kids, of course) who are still madly in love with Shah Rukh Khan. So many of us wish that he was more than just a reel-life hero. Honestly, I’d give anything to have SRK come and rescue me, not that I’m a damsel in distress but oh the guilty pleasure of it! While Shah Rukh Khan is not my real-life knight in shining armour, he did become one for actress Mita Vasisht.

In an interview with Navbharat Times, Mita Vasisht revealed that Shah Rukh Khan actually saved her life during the shoot of their film Dil Se. The 1998 romantic thriller film was written and directed by Mani Ratnam and produced by Ram Gopal Varma, Shekhar Kapur and Mani Ratnam. Shah Rukh Khan, Manisha Koirala and Preity Zinta played the lead roles in the film with Mita Vasisht, Gajraj Rao, Piyush Mishra and Arundhati Rao as supporting cast. Recalling the incident in a video interview that is now going viral on social media, Mita Vasisht shared that SRK saved her from falling off a cliff.

Mita Vashisht Talking about a fight sequence in Dil Se, that how #ShahRukhKhan saved her life.

Man has saved many lives, be it in Reel life or Real Life 💕 @iamSRK. pic.twitter.com/zA6P8logUL

The actress said that they were shooting for a scene and she was carrying a heavy prop as the actors, along with the director, were on a road that was slippery due to the snow. The director had asked Mita Vasisht to move back and the actress failed to realise that she was on the edge of a cliff that had a drop of about 100 feet. The actress moved back and just as she lost her balance and was about to fall off the cliff, Shah Rukh Khan came to her rescue and grabbed her hand to pull her back to safety.

Though this incident does sound rather dangerous and serious, I have to say this – ufff, I wish it was me! This is proof that Shah Rukh Khan is not just a reel life hero but also a real-life hero. And this is not the first time that the actor has saved someone’s life.

Also Read: Shah Rukh Khan Has The Best Response For A Guy Who Asked Him For ‘Ladki Pataane Ki Tips’

According to media reports, back in 2019 SRK saved Aishwarya Rai Bachchan’s manager Archana Sadanand during the Bachchan’s Diwali bash after her lehenga caught fire. The actor had also sustained some minor burn injuries as he jumped to save the woman by dousing the fire with his jacket.