Maheep Kapoor Gives A Sneak Peek Of Sonam Kapoor And Anand Ahuja’s Son Vayu’s Room, And It Is Super Adorable!

The Kapoor-Ahuja household is currently busy doting on their newest and cutest family member! Yes, I am talking about Sonam Kapoor Ahuja and Anand Ahuja who welcomed their son on August 20. The couple took to their respective social media accounts to also share the name of their munchkin with the world. In an elaborate post, they announced that they have decided to name their son Vayu, who also made his debut on the Gram through his parents’ post. Well, Maheep Kapoor, who is Sonam’s aunt, took to her Instagram to share a picture of Vayu Kapoor Ahuja’s room and let me tell you, it looked super cute from the outside!

Taking to her Instagram story, the Fabulous Lives Of Bollywood Wives star shared a picture of the room that will belong to Vayu Kapoor Ahuja. The door had a string of cute monkey cutouts in every colour hung over it. The picture was shared with the caption, “Vayu Kapoor Ahuja’s room.” She also added the hashtag #socute and an evil eye emoji. 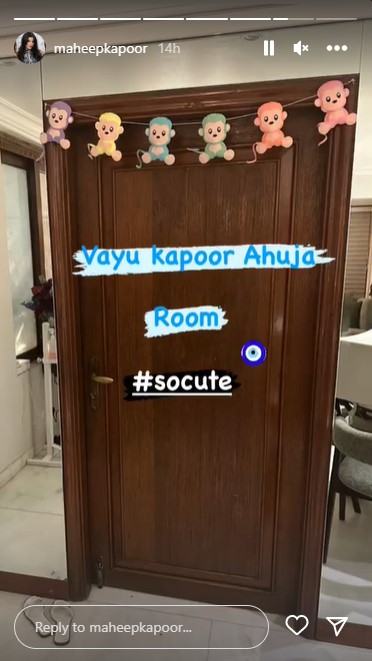 Further ahead on her Instagram story, she shared Sonam and Anand’s picture as well wherein he was holding baby Vayu in his arms and kissing his wife. 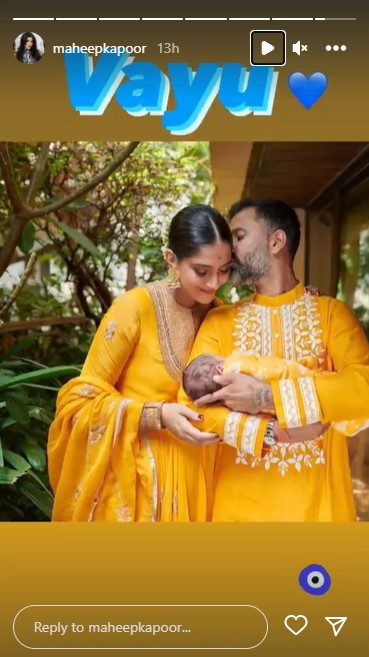 Sonam and Anand wrote an elaborate caption alongside sharing a photo of the three of them together wherein she explained the name of their son. She wrote, “In the spirit of the force that has breathed new meaning into our lives… In the spirit of Hanuman and Bheem who embody immense courage and strength…In the spirit of all that is sacred, life-giving and eternally ours, we seek blessings for our son, Vayu Kapoor Ahuja.”

The new parents announced the arrival of their bundle of joy through an adorable social media post. Sonam and Anand thanked the doctors, nurses and everyone else who supported them throughout the pregnancy.

It indeed is a very unique name that Sonam and Anand have decided on for their son and it definitely looks like they gave a lot of thought while deciding on this name. Welcome to the world, Vayu!