Arjun Kapoor and his favourite cousin, Sonam Kapoor walked gracefully to the Koffee With Karan couch in the 6th episode of Season 7. Right off the hook, we could tell that we will be seeing Arjun Kapoor as the protective brother, on screen and this was extremely adorable. This definitely got me crushing on Arjun Kapoor, there are no doubts about it.

But, it didn’t stop there. Arjun Kapoor went above and beyond to share his thoughts and experiences with us on the Koffee With Karan couch and he got, kaafi real. I think this has got to be one of the most honest celebrities on the show. Are you wondering what were the real things that Arjun Kapoor spilled the beans about, during the episode?

5 Things Arjun Kapoor Got Real About, On The Koffee With Karan Couch:

1. When He Talked About His Physical Transformation

2. The Conversation About Getting Trolled

Arjun Kapoor expressed the fact that he has always been sensitive about criticism but it’s worse when the criticism comes in the form of trolling. He had been trolled on social media for everything- his physique, his flop movies, his relationships, his sense of style and beyond. He got real about how awful it feels. He expects respect from his fans and tries to just ignore the trolls.

3, His Relationship With Malaika Arora

Arjun Kapoor was crystal clear about the fact that he loved Malaika. He also mentioned how he loves her name and the fact that he has introduced her to his family too. Furthermore, he also said that he supports her and she’s always there for him. We loved that he called her up during the ‘Hello Karan, It’s Me’ round. But, there are no wedding bells in sight for the couple yet.

Arjun Kapoor had been body-shammed for being fat all through his childhood. He spoke about the experience of being a ‘big’ boy and how everyone in the family could easily believe that ‘Arjun eats’. He further discussed how a lot of this eating was emotional and stemmed from having to deal with a lot, earlier on in life. He was very real about its effects on him and how he wants to be seen as a hot boy hero in one of Karan Johar’s movies.

5. Focussing On His Career

Arjun Kapoor was very real about the fact that he slipped up in between, career-wise. He accepted that on-screen which was very authentic but, he also mentioned that he’s working hard to rectify it. He wants to be able to do good roles and act well. He added how he was extremely passionate about cinema and loves what he does. The most real part was how he confessed that he will only consider getting married to Malaika after he feels like he has settled more, in terms of his career. I think that’s a very suljha hua decision. 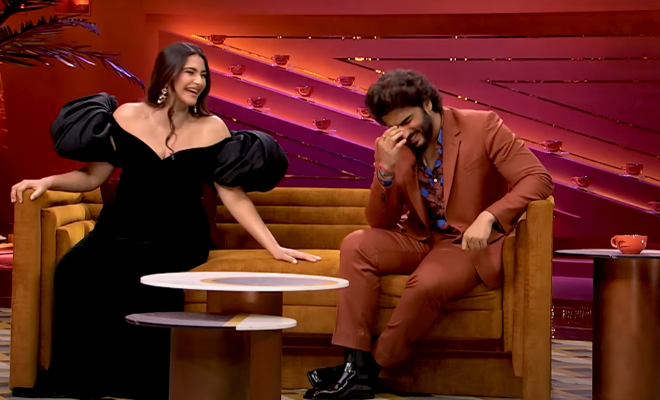 I honestly think that the way Arjun Kapoor was about to be so crystal clear, sorted and authentic about his life and everything that matters to him, made me view him in an entirely different light. His sorted persona coupled with his ‘protective brother’ side was a delight to watch and of course, to fall for. I also think it’s worth mentioning that he was the first celebrity whose rapid round was indeed rapid. Overall, I loved his presence on the show. It was a pure delight.