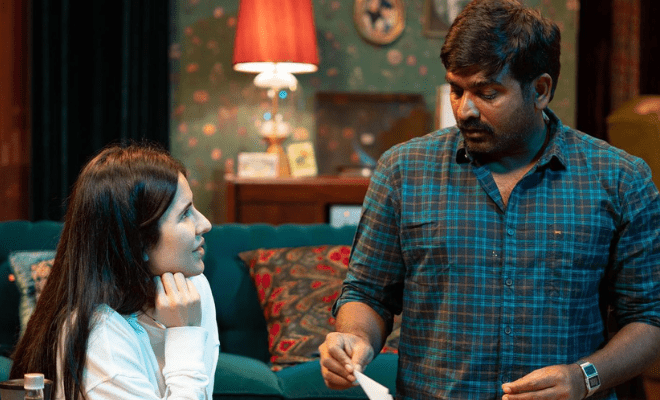 Katrina Kaif has been grabbing the headlines recently with her fun-filled and gorgeous pics from her birthday that she celebrated with her hubby Vicky Kaushal and their friends in the Maldives. However, it seems that party time is over for the actress as she goes back to work mode ever since she landed in Mumbai. In fact, taking to her Instagram, the actress shared glimpses of behind the scenes of her upcoming movie Merry Christmas where she will share the screen with the very talented South Indian actor Vijay Sethupathi. Sriram Raghavan who is considered an auteur of neo-noir action thrillers will be directing Merry Christmas – a crime thriller.

Katrina Kaif and Vijay Sethupathi kickstarted the shooting for their upcoming movie, Merry Christmas back in December 2021. And now, after taking a break, the duo along with the director Sriram Raghavan have resumed the movie’s second schedule. And the actress took to her Instagram, to share a few glimpses of the behind-the-scenes.

Also Read: Shah Rukh Khan’s Look From ‘Dunki’ Leaked And Now We Can’t Wait For The First Look From The Film!

Giving a sneak peek into the making of Merry Christmas, Katrina Kaif shares three pics from their rehearsal sessions. The first picture shows her in deep conversation with Sriram Raghavan and the other two pictures show her sharing the space with Vijay Sethupathi. The background of the pictures sets a Christmas-y mood – the time period in which the movie is set. She captioned the pics, “Work in progress”

Though not much is revealed about the movie, the reports suggest that Merry Christmas is a crime-drama thriller that revolves around a rather uneventful day that takes place on Christmas eve and turns Katrina Kaif and Vijay Sethupathi’s world upside down completely. The crime thriller seems to be all shades of edgy.

The fact that not much is revealed about the movie is what makes it even more exciting. And as far as I am concerned, I’m just curious to see this fresh pairing sharing the screen space.