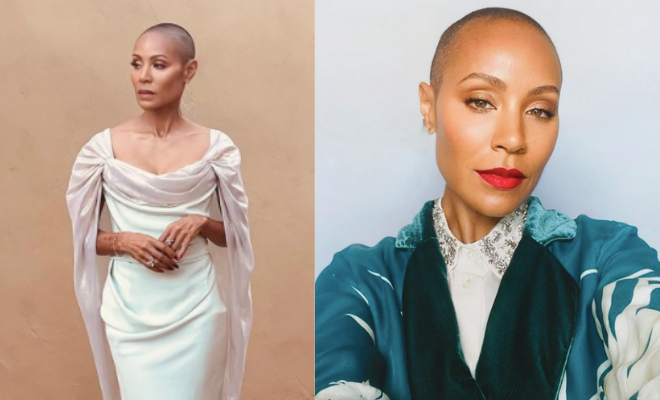 Jada Pinkett Smith Opens Up About Alopecia In Instagram Video, Says She’s Going To Be ‘Friends’ With Hair Loss

We have such high beauty standards in our society, especially for women. In order to be called beautiful (as per society standards, obviously), a woman has to have certain traits and features. I’ve been there and struggled with it. As a North Indian woman, my skin colour was the one thing that raised eyebrows. If I got a dollar for every time someone gave me home remedies and other advice on how to look fair, I’d be a billionaire by now (maybe even richer). Get my point? Living up to these unrealistic beauty standards is impossible and it’s much worse for someone who struggles with a beauty related health condition. Just recently Yami Gautam opened up about having an incurable skin condition which made it difficult for her to live up to society’s standards. This reminds me of Yami’s film Bala. This film was about a man who lacks confidence and faces societal pressure as he struggles to find love because of premature balding. Much like the film, there’s an actress who suffers a similar problem and she just opened up about her struggle. In her latest Instagram post, Jada Pinkett Smith spoke up (yet again) about alopecia and hair loss.

In her video, Jada Pinkett Smith pointed out a faint line on her head that appeared ‘all of a sudden one day’ due to alopecia. Sharing an update on her condition, The Matrix Resurrections actress said that it will be difficult for her to hide the line on her head while adding that she chose to share it so people don’t ask any questions. “Y’all know I’ve been struggling with alopecia and just all of a sudden one day, look at this line right here. Look at that. So it just showed up like that and this is going to be a little bit more difficult for me to hide,” said Smith in the video. Lightening up the mood, Jada Pinkett Smith also shared that she’s thinking of embellishing it with rhinestones and make a little crown out of it. “Mama’s gonna have to take it down to the scalp, so nobody thinks she got brain surgery or something😜 Me and this alopecia are going to be friends . . . period!😆” read the caption.

Check out this video:

Also Read: ‘The Matrix Resurrections’ Review: An Amusingly Meta First Half Couldn’t Help Me Forget Why This Is A Glitch In The Franchise

We’re so glad that Jada Pinkett Smith is not only normalising hair loss but also inspiring the people who struggle with similar conditions. Earlier in July, The Matrix actress had opened up about her condition in an Instagram post. In fact, Smith regularly jokes about alopecia in a bid to normalise it. For the uninitiated, alopecia is an autoimmune disorder that causes hair loss.

On the work front, Jada Pinkett Smith was last seen in The Matrix Resurrections alongside Keanu Reeves, Carrie-Anne Moss and Priyanka Chopra.

Considering that hair is known to be a symbol of beauty for women, we’re so proud of Jada for taking a stand and getting the conversation going. And let’s face it, not having hair does not make one ugly.