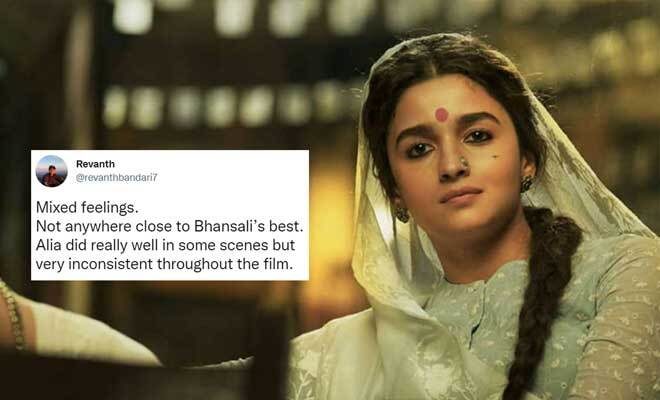 ‘Gangubai Kathiawadi’ Receives Mixed Reviews From Twitterati. Did We Overhype It?

Finally, the day is here. Yep, Gangubai Kathiawadi has finally been released. And with all the hype around it, it wasn’t much of a surprise that a lot of Alia Bhatt and Sanjay Leela Bhansali fans were the first to watch the movie. Having said that, when I went on to Twitter to see what people had to say about it, I was quite disappointed. Why? Well, it’s because Gangubai Kathiawadi has gotten a mixed bag of reactions, but most of it is leaning towards it not doing well with the audience.

Going on to Twitter to see what people wrote about Gangubai Kathiawadi was disappointing and a tad bit heartbreaking because I was really looking forward to seeing Alia Bhatt in an all-new avatar. However, reading the mixed reviews has had me wondering what the movie is like.

If you’re also like me who was waiting for the reviews to see whether to watch it or not, here are some of the reviews:

Mixed feelings.
Not anywhere close to Bhansali’s best.
Alia did really well in some scenes but very inconsistent throughout the film.

No one is watching #GangubaiKathiawadi outside mumbai. They will surely fake numbers to save career of their baby girl but it's a fact. Opening more than 3cr is manipulation.

Finished #GangubaiKathiawadi
Disappointed from slb
Below average performance of Alia Bhatt
Slow screen play
Over all it was a average movie
2.5/5

Finally watched most over hyper movie of the decade,
I was big Bhasanali movies fan but after watching this i feel like he lost his charm, what a pathetic casting in main lead. If you watch other movies of him like black, HDDCS or Bajirao casting was perfect #GangubaiKathiawadi pic.twitter.com/lqrpcxnD73

#GangubaiKathiawadi
Guys this movie is already floop do kot watch

#AliaBhatt will win almost every award (Best actress) for #GangubaiKathiawadi this year…..

SLB HAS DONE IT AGAIN!#GangubaiKathiawadi is a top-notch film! @aliaa08 outdid herself, what a performance🔥 @ajaydevgn’s screen presence is the usp! The trailer didn't do it justice on how good the film is, it’s much more than you expected it to be! 4/5 ⭐️ pic.twitter.com/AN0i8M7Q3Q

#GangubaiKathiawadi is so gripping and engaging right from the beginning.@aliaa08 amuses us with her perfomance in such a way that we can't take our eyes off from her even for a single frame. Bhansali's brilliance in writing can be seen clearly towards the end. Go watch for her🔥 pic.twitter.com/GLaGQRrNjz

Such amazing acting!! No one could have suited this role better than alia..uff, kya kick-ass attitude ❤️
SLB movies are nain sukh prapti.. #GangubaiKathiawadi pic.twitter.com/6osSjzNemk

When I read all these reviews and watched the reactions of Gangubai Kathiawadi, I’m now not too sure whether I should watch it or not. Having said that, knowing me, I’ll probably end up watching the movie once – maybe just not in the theatre. But then again I’ve not been to a theatre in a while. See the confusion? Coming back to the point, I do think the Alia Bhatt starrer movie is definitely a one-time watch.