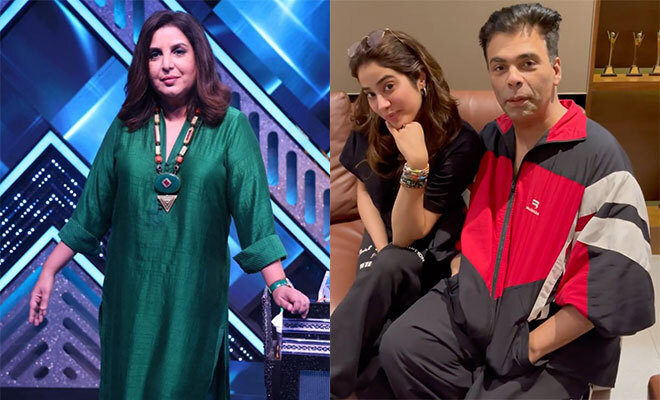 Farah Khan and Karan Johar have been friends for a very long time. The ace choreographer even proposed to him but he sadly rejected the offer. Now, she’s happily married to Shirish Kunder. But the friendship between them is still going strong and we got the proof of it. Recently, Farah Khan posted a video on her social media in which she’s making fun of Karan’s fashion sense and calling it his outfit a “parachute,” while Janhvi Kapoor looks on!

Farah Khan posted a video featuring Karan Johar and Janhvi Kapoor on her Instagram account. Karan can be seen wearing a red and black oversized athleisure wear which is looking too baggy and the choreographer couldn’t resist herself from poking fun of his look. Sharing the video, she wrote, “The wait is over…sized! @karanjohar in his office wearing a parachute..guest appearance by @janhvikapoor.”

The video starts with Farah Khan asking him to describe his look. Karan says, “Hi, good evening, namaskar, I am wearing an oversized silhouette, it’s oversized, baggy, athleisure. Now, it is oversized and that’s the new thing. Any other tips, please contact me because you need desperate help.” Then, she turned towards Janhvi Kapoor and asks him to comment on Karan Johar’s fashion but she went speechless. Janhvi questions KJo if her clothes are enough baggy for him. He replied, “No, you are looking really chic in uber athleisure yourself.” Later, Karan says that he and Jahnvi Kapoor are very fashionable people but Farah cuts him off and says “I have no interest, bye” as she ends the video.

It seems like making fun of Karan Johar’s fashion sense is Farah’s favourite hobby nowadays. A few days ago, she posted another hilarious video in which she is mocking his floral sweatshirt. She wrote, “This deserves a post..#lookoftheday @karanjohar i live for this (laughing emoji) #flowerpower NOT #rockyaurranikipremkahani.”

We love this fun banter between friends!

Farah Khan Says Kabir Singh May Not Win Awards For The Amount Of Criticism It Has Received. It Would Be Great If That’s The Case