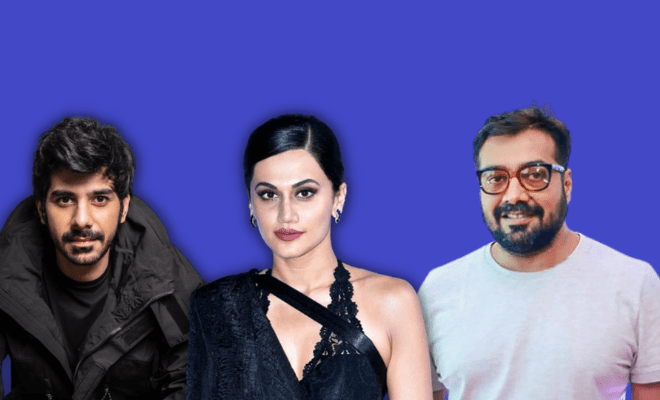 The release dates for the highly anticipated film Dobaaraa, starring Taapsee Pannu and directed by Anurag Kashyap, have been announced. The movie will be released on August 19, 2022. This is the second project of Taapsee Pannu and Anurag Kashyap after Manmarziyaan. Also, the fans will yet again get to see the Thappad duo, Taapsee Pannu and Pavail Gulati in this one. The movie prior to its theatrical release will be screened at the London Film Festival 2022. It will also be the first movie to be produced under Ekta Kapoor’s Balaji Telefilms Cult movies.

The announcement was made by the London Indian Film Festival on its official Instagram page. They posted a picture of Taapsee Pannu and Anurag Kashyap and captioned the image with the announcement. They also praised the film as a new-age narrative that the audience would enjoy. The film’s directors and producers are also mentioned in the caption. London Indian Film Festival has premiered many movies of Anurag Kashyap over a period of 12 years, the caption further said. It also gives a sneak peek into Taapsee’s character in the movie, stating that she is a woman trapped between two lives in different decades. Expect a twisted storyline with this one.

See what happens when you travel time across the dimensions of the universe. Filming begins soon! #Dobaaraa

Anurag Kashyap released a teaser trailer for the film on Twitter in February of last year. He accompanied it by referring to some time-travelling plot that the audience should watch out for in the movie.

Also Read: Taapsee Pannu’s ‘Shabaash Mithu’ Gets A Release Date. Excited To See Her Hit Another One For A Six

The audience adored the duo’s previous film, Manmarziyaan, which also starred Abhishek Bachchan and Vicky Kaushal. This one, too, comes with high expectations.