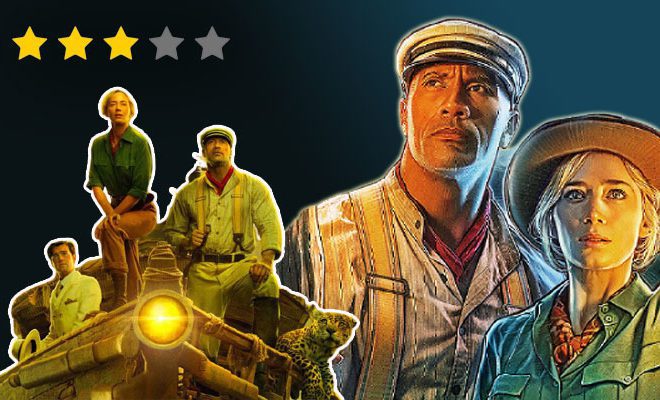 Disney’s ’Jungle Cruise’ Review: A Fairly Entertaining Joyride, But Not Without Holes In Its Ship

These days, for some of us, the joy of watching a movie in a theatre is as rare as the fictional Tears Of The Moon flowers that the conquistadors and protagonists of Disney’s Jungle Cruise are searching for. So I will admit that I am a little more forgiving and rather generous in my appreciation of whatever film I do get to watch on the big screen. That’s not to say that the Dwayne Johnson, Emily Blunt, Jack Whitehall, Jesse Plemons, Paul Giamatti and Edgar Ramirez starrer adventure caper from director Jaume Collet-Serra isn’t good. It’s rather entertaining, and it definitely has its moments. But the fact that this ship cautiously steers clear of deep waters and the glaring holes in its writing remind me less of a Hollywood spectacle like Pirates Of The Caribbean or Indiana Jones, and more of a Bollywood production that is all theatrics and not enough effort in the writing.

Again, it’s not necessarily a bad thing. It’s just that sometimes you sit through a movie really enjoying it. But once the credits roll and lights come on, your brain starts poking holes in the ship. And then, well, the water flows in, making it difficult for the ship to stay afloat like it was before.

Jungle Cruise follows the adventures of Dr. Lilly Houghton, who is determined to go to South America, where somewhere down the Amazon River, exists a magical Tree whose flowers, Tears Of The Moon, have healing powers. Her brother, McGregor is a reluctant co-passenger on this journey, which begins from a port in Brazil. That’s where the siblings meet Frank Wolff, who is a steamboat skipper they hire to ferry them to their destination.

But of course, it isn’t going to be an easy journey. Hot on their heels is a Prince Joachim, a crazed German royal who has been trying to get his hands on an arrowhead that belonged to the native Amazonian Puka Michuna tribe, who were protectors of this magical tree. It was taken from them some 360 years ago, when a man named Don Aguirre lead a bunch of Spanish conquistadors went on a similar conquest, killed the tribal chief for the arrow head and ended up getting himself and his men cursed for eternity.

So now, not only does Lilly have to deal with the deranged German prince and his submarine on their trail, but also with whatever perils the river throws at her, and the skipper, Frank, who she can’t quite trust yet. Oh and of course, the sexism, which makes every man, from her time and the past, underestimate her capabilities.

As I’ve said before, Jungle Cruise is a pretty decently entertaining joyride. I love how the film opens, and the library archives sequence and the Brazil port sequence are possibly my favourites of the lot, mostly because Emily Blunt really gets to do some swashbuckling fun. She is always a delight to watch. Her character is actually the one said to be based on Indian Jones, and she does seem to infuse her portrayal with that zest and charm. It’s actually her banter with the men, and her character journey as she proves herself no less than any man, that I rather enjoy. And I am glad that she doesn’t need saving from anyone. It’s evident from the first minute that she is the hero of this story.

My second favourite character is the brother, McGregor, played spiffingly by Jack Whitehall!. I am still a bit on the fence about the motivations of his character to join his sister on this clearly life-risking treasure hunt. But that takes nothing away from Whitehall’s performance, which is funny and perfectly endearing. That last bit is perhaps no the right adjective I’d use to describe Prince Joachim, who is easily a lunatic putting military might and pretty much ancient zombies behind the Houghton siblings and Frank, all for the arrowhead. But Jesse Plemons’ portrayal is so hilarious, that you instantly want to see more of the bad guy who makes you laugh. There’s a scene with bees….

Jungle Cruise has enough to please you on a surface level. It’s runtime at 127 minutes doesn’t feel too heavy; there’s always humour, no matter if the scene is action or romance, and the banter pretty much never stops, which makes you think people in the early 1900s really knew how to sass. The special effects are okay. However, there are some glaring writing inconsistencies, sparsely in the beginning but  especially during the climax, that make you wonder, “But wait, how did this happen?” Or “Wait, couldn’t they have done things differently instead of the way they just did?” It is these issues with the writing that made me think, this is exactly how Bollywood does it. It focuses so much on the swashbuckling that it doesn’t focus enough on writing a half decent ending. There are no stakes, everything is just too easy, and a lot of things remain unexplained.

I suppose you would’ve realised that I haven’t yet mentioned Dwayne Johnson. Look here, I love The Rock, okay? He is amazing. And this whole charismatic, charming but with his own dark secret character of Frank seems perfect for someone like him. However, I felt like he didn’t challenge himself to do more. It was all too vanilla, too easy. Sure, he is Dwayne ‘The Rock’ Johnson, so you’re never not going to enjoy that larger than life dynamism on screen. His introductory scene is quite the spectacle too. But I wish there was more.

He and Blunt are supposed to have chemistry, which they do, but it feels very platonic, like they could be good friends, but not lovers. Nope. He had more chemistry with Proxima though! Who is Proxima? No spoilers but you’re going to love her! Speaking of spoilers, I think most of my issues with loopholes are also connected to Johnson’s character arc.

Considering the Disney film tried hard to be woke here, by adding the whole gender equality angle, as well as LGBTQ+ representation that might feel a tad like queer baiting, I would hope that the film would have a more layered approach to themes like human greed, or the cons of an all-healing cure being taken out into the world even if with good intentions. These topics are imitated subtly, but never explored, and it feels like a lot of loose ends remain at the end of the movie. Not to mention, it could’ve made for good character development for our heroes too. I think the only one who gets in character development here is McGregor. Of course, thanks to the delayed release in India, we already know that there is a sequel happening. So perhaps that one would be more richer with its subtext. Let’s hope so.

Don’t go expecting some Pirates level swashbuckling and plots or Indian Jones level memorableness. If you’re looking for some simple, unadulterated fun time, your two hours will be well spent on Disney’s Jungle Cruise. It’s without a doubt entertaining for every age group—you’ll get plenty to laugh about, cheer for, and some to even “oooh” over. And Emily Blunt is never not a treat for eyes, irrespective of whether you’re watching her on the big screen or small.

‘Shang-Chi And The Legend Of The Ten Rings’ Review: A Marvel Origin Story That Looks Stunning, Is True To Its Asian Heart, And Has Action That Kicks Ass