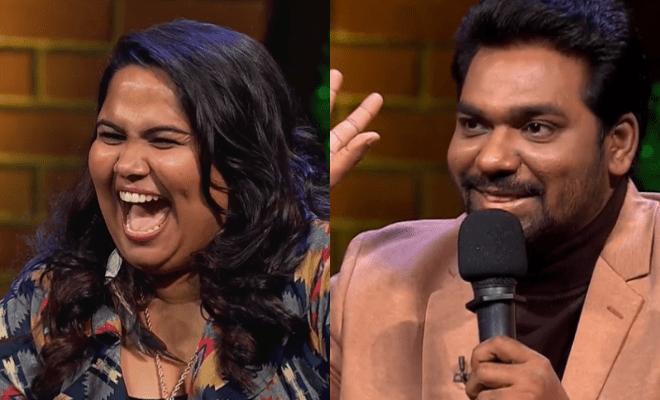 ‘Comicstaan’ Season 3 Teaser Is All About Zakir Khan, Sumukhi Suresh And Others Going LOL!

The Indian stand-up comedy space has been on the rise and we discovered many comedians in the wake of it as well. And shows like Comicstaan have helped budding comedians come forward and show that they can make people laugh with their sense of humour and funny content. The first two seasons of the show were a huge hit and the audience has showered love on it and the third one is underway! Fans have been eagerly waiting to get a glimpse of the comedy talent that is going to participate in the show this time. A teaser of the same was dropped on July 5.

The 20-second teaser showed that the audience is in for a hilarious ride this time as well. The participants were seen doing goofy acts that made the judges roll on the floor laughing! The season is set to be hosted by Abish Mathew and Kusha Kapila. Some of the most popular Indian comedians like Zakir Khan, Sumukhi Suresh, Neeti Palta and Kenny Sebastian are going to judge the participants.

The teaser of Comicstaan season 3 was shared with the caption, “We hate to be the reason for your hurting tummy, teary eyes and aching jaws but Comicstaan is coming on 15th July! 😎 Trailer dropping in 2 days! #ComicstaanOnPrime.”

We hate to be the reason for your hurting tummy, teary eyes and aching jaws but Comicstaan is coming on 15th July! 😎
Trailer dropping in 2 days!#ComicstaanOnPrime pic.twitter.com/MjGB04NO1L

The season will see eight participants making their way to the end by tickling the funny bones of the judges and the audience with their hilarious pieces! The participants will be trained by Rahul Subramanian, Rohan Joshi, Prashasti Singh, Kannan Gill, Sapan Verma, Aadar Malik and Anu Menon.

The trailer for season 3 will be dropped on July 7, 2022. And the show premieres on Amazon Prime Video.