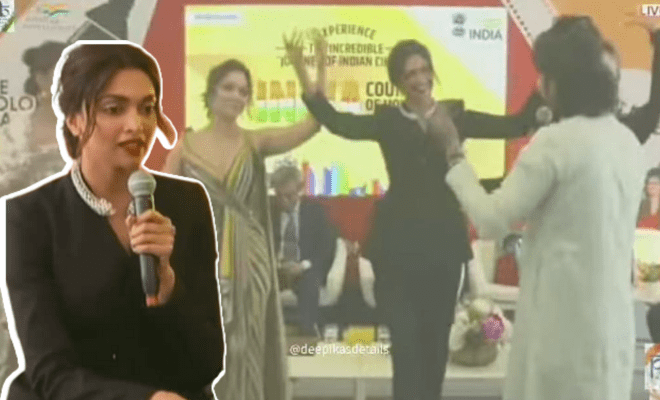 One of the proudest moments for Indians at the 75th Cannes Film Festival was when the India Pavillion was inaugurated. The entire Indian delegation – Deepika Padukone, AR Rahman, Mame Khan, Urvashi Rautela, Tamannah Bhatia, Pooja Hegde, and more – along with Information and Broadcasting Minister, Anurag Thakur were present for the event expressing how happy they were to represent the country. In fact, two moments from the event have grabbed eyes on social media – one where Deepika Padukone can’t help but praise India for how far it has come and how far it has to go, and the second where folk singer Mame Khan sings and we see the actresses shake a leg to it.

Deepika Padukone, who is also a jury member of the 75th Cannes Film Festival, in a conversation during the inauguration of the India Pavillion, spoke about the greatness of the country and how proud she is that India is in the spotlight at the festival. She even goes on to thank AR Rahman and Shekhar Kapur for putting India on the global stage.

#WATCH "India is at the cusp of greatness, this is just the beginning…there will come a day I truly believe where India won't have to be at Cannes, but Cannes will be in India," says Deepika Padukone at the inauguration of India Pavilion at the 75th Cannes Film Festival pic.twitter.com/66z9RLw2L0

As per reports, the actress looks back on her 15-year-long career and says that no one believed in her or her craft enough to ever think that she would make it this far and so being here and experiencing some of the “best cinema in the world” has been a quite a journey that she is extremely grateful for. Deepika Padukone said, “India is at the cusp of greatness, this is just the beginning… there will come a day I truly believe where India won’t have to be at Cannes, but Cannes will be in India.”

Following her incredible short speech at the inauguration, the famous folk singer Mame Khan took the mic to sing a folk song for the audience. And in the video that came out, you can see actors Deepika Padukone, Tamannaah Bhatia, pooja Hegde, and Urvashi Rautela shake a leg to his soulful singing.

Even Anurag Thakur, who is the I&B Minister, said that India is paving the way to give the global audience a taste of the country’s cinematic flavours, technological prowess, rich culture, and the age-long heritage of storytelling. In fact, even Tamannah Bhatia called Cannes and India’s partnering ‘iconic’.

At Marché du Film, this yr India intends to give the global audience a flavour of the country's cinematic excellence,technological prowess,rich culture & illustrious heritage of storytelling: I&B Minister Anurag Thakur at inauguration of India Pavilion at 75th #CannesFilmFestival pic.twitter.com/zHQfeUN96W

India has contributed for years together & finally in the 75th year, the partnering of #CannesFilmFestival with India is really Iconic, says Actress @tamannaahspeaks at the inauguration of #IndiaPavilion at 75th Cannes Film Festival.#IndiaAtCannes pic.twitter.com/wKWHaQcvOM

Truly, such a proud moment.