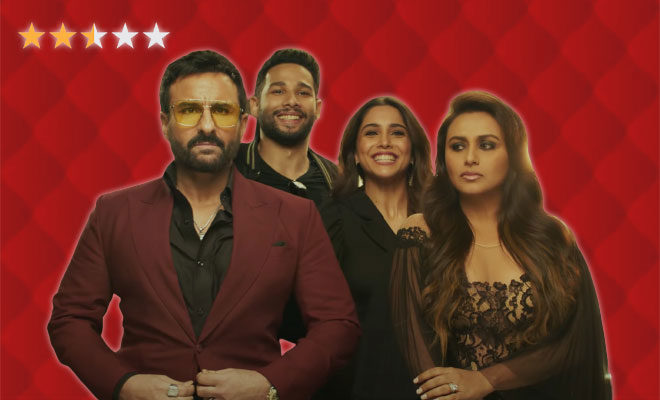 ‘Bunty Aur Babli 2’ Review: Rani Mukerji Rules This Fun Sequel, But Missing The Charm, Music And Abhishek Of The Original

Can I just address the elephant in the room? This film, right here, should’ve been the big Diwali release that brought people back to the theatres, and not the one that we actually got. Why do I say that? It’s not like Bunty Aur Babli 2 blew my mind or exceeded expectations. But at least, unlike that other one, this film managed to not make me say, “What the F is happening?” while I shrink deeper and deeper into my seat from cringe. Despite staggering loopholes in logic and a plot that could’ve been better endowed, I was enjoying myself, laughing loudly at the jokes, and realising just how much I missed watching Rani Mukerji as Vimmi aka OG Babli on screen. Throw in a classic Pankaj Tripathi, a promising debut by newcomer Sharvari, and two child actors with more attitude in their veins than most actors of our generation, and you’ve got a film that is watchable, entertaining and does not put you off the franchise. Like, if they made a Bunty Aur Babli 3, I might just return to watch it.

Bunty Aur Babli 2 comes from YRF and Aditya Chopra and is directed by Varun V. Sharma. While Rani Mukerji returns as Babli, we have a new Bunty replacing Abhishek Bachchan, Saif Ali Khan. We also have Bunty And Babli 2.0, played by Siddhant Chaturvedi and Sharvari. As for the role of the cunning cop, a part played by Amitabh Bachchan in the first film, it now is in the extremely capable hands of Pankaj Tripathi. Shankar-Ehsaan-Loy also return as music directors for this sequel.

Snapshots of the first film also make a bittersweet comeback in the opening credits. Bittersweet because while Saif Ali Khan does make a seamless entry into the franchise, the older Rakesh never really exited our hearts so…. Anyhoo, we meet a domesticated Rakesh and Vimmy Trivedi, their reason to leave their con artist alter-egos behind now a grown-up teenager called Pappu. Rakesh has taken over his father’s profession of being an Indian Railways employee. Vimmi is channelling her fashion designer skills into being Phursatganj’s very own Sabyasachi, as she rips off his designs with her own touch, and even her own logo which has a V and a cat instead of the Royal Bengal Tiger (a nice touch of irony since Sabyasachi is the one responsible for Rani’s looks in the film!).

However, bad news comes to them via the very train tracks that had changed their life. A new cop, Jatayu Singh, suspects them and eventually seeks their help in nabbing a copycat duo who are running cons under the Bunty Aur Babli pseudonym. Initially helping out of compulsion (because police ‘force’), Rakesh and Vimmi soon realise they don’t like anyone tampering with the brand name they spent their best years building up. And then it’s OG versus Gen Z, with Jatayu Singh supervising the whole game from the shadows.

I could launch into elaborate explanations about there being massive loopholes in the film’s logic—like Holi colours hiding faces enough to not remember them the next time, and the cops refusing to get with things like social media tracking and facial recognition technology—because there are. The biggest perhaps being how a paunchy Rakesh and an older Vimmi can successfully chase a much younger, fitter couple so easily. Or where is all the money coming from to pull such elaborate cons? But let’s get to the parts that actually make a difference.

The humour and dialogues are pretty decent. It isn’t crass or cringe like a certain cop film that recently dropped, even if it is typical Bollywood. When Pankaj Tripathi and Rani Mukerji mouth those typical North Indian colloquial terms, it is a laugh riot! Unfortunately, the three S—Saif, Sharvari and Siddhant don’t exactly pull off that accent bit. In fact, for the most part, especially in the second half of the film, all three look like they walked into this film straight off the sets of Race, if you know what I mean.

I particularly enjoyed the two child actors, who play Pappu (Rakesh and Vimmi’s son) and his girlfriend Rinku, who killed it with her dance on a song that is going to make you smile.

Speaking of smiling, Bunty Aur Babli 2 has so many, many odes to the original, and for me, who loves the first film, it was like going on a mini Easter egg hunt to spot the callbacks. For example, the walls of Vimmi’s home are still plastered with cutouts of magazines for her inspiration. Babli still uses this hand mirror that I remember from the first movie. Some choice characters return. And if I am not mistaken, when the new Bunty Aur Babli drive a car, it is the same colour as the Maruti Suzuki Swift that the OG ones drove and was a major marketing moment for the automobile brand in 2005, with the car being called the Bunty Babli car after the film became popular.

But speaking of songs, I don’t think this album compares to the 2005 one, in which every single song remains on my playlist even now. I mean, Dhadak Dhadak? Kajra Re? Chup Chup Ke? That unforgettable title track with the “Ho Ho!” in the end? *chef’s kiss* ‘Tattoo Waaliye’ and ‘Luv Ju’ grow on you eventually. But I think I dig ‘Tattoo Waaliye’ only and only for Rani Mukerji, who looks so smouldering hot in it, it’s as if no time passed since she donned a similar sequinned number for, say, a ‘Nach Baliye’. Those eyes, my Queen! I had eyes only for her!

Also Read: 5 Thoughts I Had While Watching ‘Tattoo Waaliye’ From ‘Bunty Aur Babli 2’

When it comes to performances, again, Rani Mukerji steals the show as Vimmi. The moment she mouths a dialogue, you’re immediately transported back to what I call the ‘Bunty Babli zone’, as if nothing has changed. This one scene where she scolds a bunch of people, including a dog, is hilarious and flashes the full power of what Rani the actress can do. I missed her, because I think the way she pulls off those outrageous outfits (sunflower sunglasses OMG!), the loud makeup, and that UP ki Sikhni accent, I don’t think anyone else could’ve.

Now, I really love Saif Ali Khan, I do. He is incredibly versatile, and I don’t think I have disliked him in anything so far, not even in this film. But but but, OG Rakesh yaar! There was a certain innocence to Abhishek’s Rakesh, which I sorely missed Also, I felt like Saif couldn’t pull off that Phursatganj accent, and I don’t think there’s any way to make him look convincing as a paunchy, middle-aged man, without maybe prosthetics. Siddhant is good, and newcomer Sharvari’s performance is genuine; I look forward to seeing more of her. Pankaj Tripathi is his usual entertaining self and I loved watching his interactions with his fellow cops and with Pappu.

The first Bunty Aur Babli has a special place in most of our 90s kids’ hearts. There was a certain charm to the film, in knowing how these two people, turned away by their fortunes, come together to seize their own luck. And I couldn’t find that heart anywhere in the film, try as I might.

Still, Bunty Aur Babli 2 is fun and entertaining and doesn’t try too hard with its humour, which is a plus. You cannot help but compare it to the freshness and emotional connect of the first one, mainly because the new pair does not get the same endearing character backstories as Rakesh and Vimmi did. Perhaps because they were copycats, but this film’s cons too didn’t feel half as delicious. Nevertheless, the film still managed to pleasantly surprise me with how easily Rani Mukerji slipped back into character, how Pankaj Tripathi was the perfect successor to Amitabh Bachchan’s Dashrath Singh (the mythological reference game is on point), and how little Pappu was an absolute scene-stealer. Is it a worthy follow up? I am not so sure. I would’ve liked a slightly different ending, or changed the plot to focus less on he older Bunty and Babli’s domestic life, and more on the new duo’s origin stories.

But if you want to return to the theatres for a fun experience, this right here could be a nice watch.

Kareena Kapoor Shares How Saif Ali Khan Silently Supports Her. Where Do We Find A Husband Like Him?