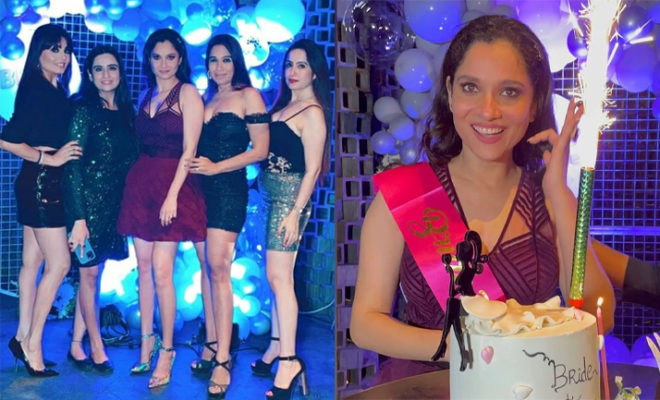 Actress Ankita Lokhande who played Archana in the hit T.V show Pavitra Rishta and became nearly every Indian mother’s ideal bahu is getting married for real. She is set to tie the knot with her boyfriend Vicky Jain and the festivities have already begun! On Tuesday, bride-to-be Ankita Lokhande celebrated her bachelorette party with her friends including fellow actresses Rashami Desai, Mrunal Thakur, Srishty Rode, Mahhi Vij, Aparna and others. Ankita Lokhande was all smiles and looked stunning and we loved it!

Many pictures and videos from the bachelorette party were posted online and there’s no doubt that the party was absolutely lit! The gorgeous bride-to-be wore a beautiful wine-coloured short dress with high heels. The song “Din Shagna Da” played in the background as she cut a white cake with bride-to-be written on it, she also got a little (fake) teary-eyed just before bursting out with laughter. In one video, she can be seen singing and dancing with her friend on the song “Main Sasural Nahi Jaungi” but she immediately confessed that she does want to go now: “Nahi, abhi jaana hai.” In other clips, Rashami Desai can be seen giving a piggyback ride to Ankita Lokhande. Lucky bride, huh!

Also Read: From Vicky Kaushal And Katrina Kaif To Ankita Lokhande and Vicky Jain, Check Out The Couples Rumoured To Tie The Knot This Wedding Season!

Recently, Ankita Lokhande confirmed rumours about her marriage plans when she shared a glimpse of presents she received as “bride-to-be” and “happy bride” written on them. As per reports, the wedding will take place at a five-star hotel in Mumbai next month. The lovely couple celebrated their third dating anniversary, this year. In an Instagram post in June, Ankita Lokhande called him “the best boyfriend in the world!” She added that after feeling heartbroken in past relationships, Vicky was the one who made her believe in love again. Best boyfriend indeed!

We’re sure Vicky Jain will also get the tag of “Best Husband in the world!”