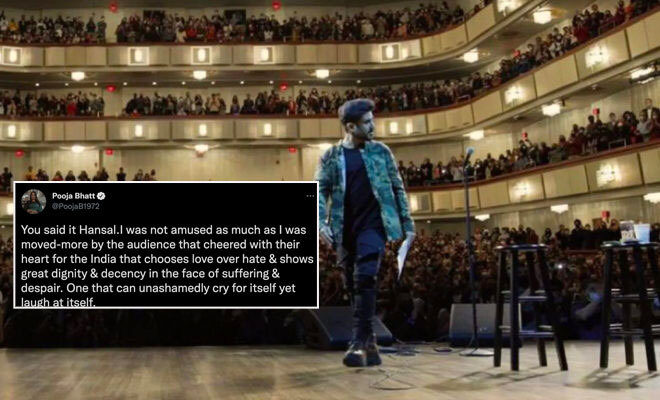 You know a piece of content is good and intellectual when you have a divided house. I mean, it is necessary to have a divided house since it will push people to express their opinions that will further push others to think about it. And that is exactly what’s happening with the new video uploaded by Vir Das – I Come From Two Indias. Where there are people like Kangana Ranaut and BJP leader Aditya Jha criticising the piece, there are other Bollywood celebrities like Taapsee Pannu, Hansal Mehta, Pooja Bhatt, and Rich Chaddha have not only appreciated the content but also lauded Vir Das for putting such a powerful piece of content out knowing that there will be a repercussion.

After Vir Das put his video ‘I come from two Indias’ out and it went viral, the house has been divided over it – especially Bollywood. Where there is one section that is heavily criticising it for being derogatory towards India, the other side is proud that there are people in this country who care so much and still take pride in India after knowing the good and the bad.

Out of the many Bollywood celebrities that have extended their support to Vir Das, one of them is the ever-bold Taapsee Pannu. Taapsee is known to express her opinion loud and clear, so it did not come out as a surprise that she came out and extended support to the stand-up comedian. She wrote, “Because I come from the India which not only swells with pride and happiness to see a fellow countrymen reach that respectable stage but I also come from the India who believes we shall get through this time too.” 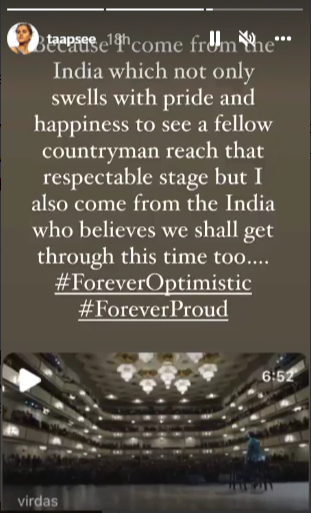 Also Read: Kangana Ranaut Wants Action To Be Taken Against Vir Das For His ‘I Come From Two Indias’ Video

Reports suggest not only Taapsee Pannu, but even other Bollywood personalities like Hansal Mehta, Pooja Bhatt, and Richa Chaddha also came out in support of Vir Das. They wrote about how they were moved and Richa even went ahead and slammed the ‘national image’ argument stating that the argument goes down the drain when “brutal crimes make headlines”.

Vir Das | I COME FROM TWO INDIAS https://t.co/K4BU1OhP4i via @YouTube

You said it Hansal.I was not amused as much as I was moved-more by the audience that cheered with their heart for the India that chooses love over hate & shows great dignity & decency in the face of suffering & despair. One that can unashamedly cry for itself yet laugh at itself. https://t.co/sBYPITBtXc

Gentle reminder that the pursuit of azaadi must also free us from all-season RWA presidents masquerading as politicos. The ‘national image’ argument is irrelevant, when brutal crimes make global headlines and the country has fallen several ranks in ALL indices. So puhleaze. 🥲 pic.twitter.com/g95sjvJLCS

In fact, it was not just Bollywood that was divided over the video, even the politicians of our country that were divided. And the one politician who came out in support of Vir Das was none other than Shashi Tharoor. He tweeted, “A stand-up comedian who knows the real meaning of the term “stand up” is not physical but moral — @thevirdas spoke for millions in this 6-minute take on the Two Indias he hails from & stands up for. “This is a joke, but it’s just not funny.” Brilliant.”

A stand-up comedian who knows the real meaning of the term "stand up" is not physical but moral — @thevirdas spoke for millions in this 6-minute take on the Two Indias he hails from & stands up for. https://t.co/94h4SnyZhX
"This is a joke, but it's just not funny." Brilliant.

Along with Bollywood actors, there were some television actors that also extended their support. Nakuul Mehta and Shruti Seth were two of them who applauded the video, the content, and even thanked Vir Das for speaking up.

I felt I was in that room. I really did. Thank you for your art @thevirdas https://t.co/2CSe09pIyk

You speak for millions of us proud Indians @thevirdas
Thank you for that https://t.co/JHUrIMQXSm

Now, I know that Bollywood, politicians, and netizens are a divided house. But I think this piece is more than what words are being spoken. I think it is about the emotions that are hidden in there and that’s what Vir Das wanted to share with the people. Like I said, I could sound like I’m siding with him (and that’s because I am) but I also believe that everyone is entitled to their opinions. So you can make that decision for yourself after watching the video.