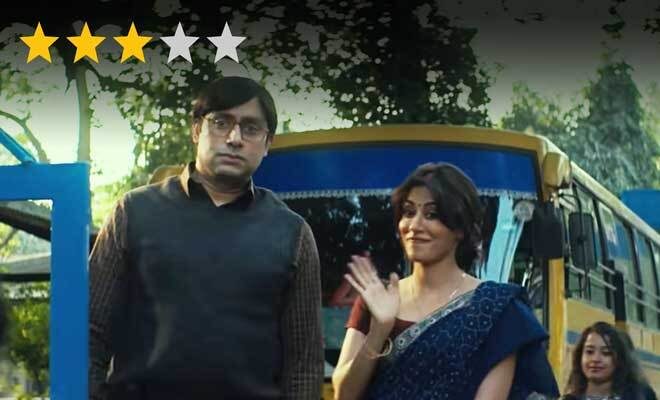 I’ve always been fascinated by the darkest hues of the human mind, which makes me the girl who would binge-watch shows like Criminal Minds and Mindhunter (bring it back please, David Fincher, sir!). Understanding what makes killers tick, their journey to become the murderers they are, and what part nature and nurture play in it…. When I watched Kahaani, more than Vidya, it was Bob Biswas, played to eerie perfect by Saswata Chatterjee, who utterly captured my fancy. I wanted to know what made this quiet, creepy, boring life insurance agent such a deadly, cold-blooded assassin. So when this spin-off about the character was announced, I was excited.

There has been a lot of debate surrounding the casting of Abhishek Bachchan as Bob Biswas. And I’d be lying if I said I wasn’t disappointed that Saswata wasn’t reprising the character that might’ve been written well on paper but couldn’t have amounted to much had it not been for his chilling performance. However, knowing how AB Jr. integrates himself into this kind of character with utmost sincerity, I knew that his Bob Biswas wouldn’t be bad, just not the one we fell in love with. Just like Saif Ali Khan’s Rakesh in Bunty Aur Babli 2 wasn’t bad, but not the one we fell in love with.

Bob Biswas is directed by Diya Annapurna Ghosh, written by her father and Kahaani filmmaker Sujoy Ghosh, and Raj Vasant, with cinematography by Gairik Sarkar, editing by Yasha Ramchandani and scored by Clinton Cerejo and Biancas Gomes. The music is by these two, as well as Vishal and Shekhar and Anupam Roy. Along with Abhishek Bachchan, the film also stars Chitrangada Singh, Ronith Arora, Samara Tijori, Bhanu Uday, Vishwanath Chatterjee, and Paran Bandopadhyay, with a guest appearance from Purab Kohli.

The demystification of a sinister character is a major risk, you know, because once you know what’s behind the curtain, the magic trick is a lot less ‘magic’ and a lot more ‘trick’. But I was willing to give up that mystery if it were a convincing character arc for Bob Biswas.

Unfortunately, some really lazy writing and inconsistencies played spoilsport for this kahaani. We meet Bob Biswas after he has woken up from an 8-year-long coma, with amnesia of his previous life. He has a beautiful wife, two kids, a home and a secret life that he has no memory of. The premise is interesting and full of potential. In fact, it reminded me of this Korean drama that I heard about called Psychopath Diary, where a meek, timid guy stumbles across a killer’s diary when he witnesses him committing a murder. He then has an accident, loses his memory and thinks the diary belongs to him and that he is a psychopath killer. His life changes as he slips into the skin of the murderer he believes he is.

Bob Biswas has none of that intricacy. Nevertheless, it is still very much fun to watch Bob just pop off as his amnesiac self slips easily back into those killer reflexes. Without spoiling it for you, a bunch of other reviewers and I positively squealed during this one scene with Bob and his school-going son’s bully, and a rabbit. These initial encounters (pun intended) are fun, but when it’s down to business, that’s when things get a little… not fun. Come to think of it, just continuing in this vein of a dark comedy where Bob Biswas stumbles through the dark to become a killer once again would’ve been a nice, entertaining watch. Alas!

The film’s central conflict is a drug racket in Kolkata that has young kids and teenagers in its clutches, all doped up on a pill called Blue, including, predictably, Bob’s daughter. There’s good cop, bad cop, honour among thieves, and a secret underground network of killers for hire, which according to me deserves a spin-off of its own (or maybe not). Bob’s in the middle of it, unable to remember which side he was playing on, and slowly piecing it all together, including how he feels about this family of is. Think of it like Family Man, but instead of a good cop, Bob’s the bad guy. Or the good guy? I don’t know, his morals are dubious.

And in fact, that’s one of my biggest concerns about the film. Part of me thinks that the film feels slow because of how slow and shantijeevi Bob Biswas himself is. I mean, the dude even asks for “ek minute” before shooting his mark in the head! But it’s sad that despite all that time, the character progression remains hazy and unconvincing. The Bob Biswas we know from Kahaani seems amoral, without a conscience, and neither good nor bad, just someone who wants to do his job.  But even though this film repeatedly inserts the old Gita lesson that everything is God’s intention and man is merely a conduit for it, at the end of the film, this version of Bob Biswas still comes out as an endearing hero.

Which then makes me wonder, what was the purpose of this film? To endear us to this killer? But wasn’t the whole USP of this character that he is unpredictable and emotionless? Why then did we give him a sequel that does nothing to explain who he became the killer he is but instead just drops us in the middle of a detour he took, which burdened him with emotions and loss and trauma, and turned him into an anti-hero?

In fact, from the start of the film until the end, you just feel bad for the guy and think every person he has killed deserves to die. Where’s the conflict? The misgivings about falling for the bad boy, rooting for the villain?

Add to that Abhishek Bachchan’s Bob Biswas has none of the hair-prickling creepiness of Saswata’s Bob. This makes the end twist for me even more confusing because I am not sold on the character progression. This can’t be the same Bob who we see go after Vidya in Kahaani. Rather, that should have been his past, which he lost in the accident. And this film should’ve given us a Bob Biswas who almost got out of that life because of his amnesia but got pulled back in, and is now a killer with a conscience. He isn’t emotionless anymore but fuelled by a strong rage after what happened to him and his family.

Once again, I would like to laud Abhishek Bachchan for taking up a role that would have been difficult to step into, and making it his own. I have no complaints there, except perhaps, the inconsistent Bengali accent. I don’t think any of the other performances were particularly remarkable, except perhaps Kali Da’s character. I wish the family—wife and kids—had more to do in terms of influencing Bob’s character. Or if at least one of them had found out about his moonlighting gig to make things interesting. But they were all so busy being ‘good’, that the only influence they had on Bob made him a good person, thereby ruining his deliciously amoral appeal.

NGL, I had a nice time watching Bob Biswas. It’s got its dark humour moments. But it did leave me unsatisfied with how it left things in the end, or even wondering if he could’ve done better if the premise was built upon better and led elsewhere.

All being said, Bob Biswas is amongst one of the better offerings from Bollywood lately, so definitely give it a watch on Zee5, where it is currently streaming.

“Here To Win”: Trailer Of The Ranveer Singh Starrer ’83’ Is Finally Out And Here Are 5 Thoughts I Had While Watching It