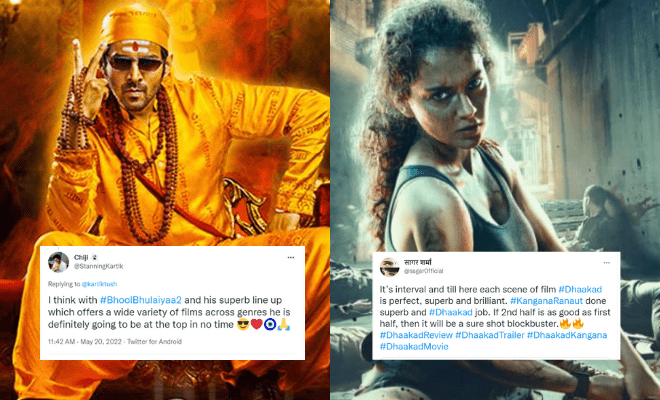 A little while back I had spoken about Kangana Ranaut and her comment on the release dates of her Dhaakad and Bhool Bhulaiyaa 2 starring Kartik Aaryan, Tabu and Kiara Advani. She had said that there is no reason for there to be conflict for either of the films and they can both release together and do well on their own. I also wrote a review of  Bhool Bhulaiyaa 2 yesterday and have already written my review on it. However, now that both of the films have released, tweeple have been commenting on both of the films so let’s check out what people have today about both of these. Bhool Bhulaiyaa 2  has gotten people talking

#BhoolBhulaiyaa2 is timepass pop-corn entertainer with a blend of thrills, chills & laughs – the right ingrediants of a HIT film. While premise does require suspension of disbelief, it's #AneesBazmee's conviction over the madness that sails it through

– Horrible direction & weak script ruins this film. Too many wasted characters. Songs are shot beautifully but camerawork in rest of the movie is avg. Works in parts. Barring few funny moments and #KartikAaryan, nothing else makes sense.

Also Read: ‘Bhool Bhulaiyaa 2’ Review: A Hilarious Horror-Comedy That Had Potential To Be A Brilliant Spoof Had It Not Taken Itself So Seriously

Magician called #Tabu does it again. She towers in #BhoolBhulaiyaa2 with her sheer CLASS!!! Ufffffffffff

#BhoolBhulaiyaa2 is an entertainment package stored for you in the form of super one liners , good twists & turns,situational comedy and energetic performances. @TheAaryanKartik and @advani_kiara form a fresh pair and look good on screen!Visuals and direction top tier.

#BhoolBhulaiyaa2Review
🌟🌟🌟🌟#BhoolBhulaiyaa2 is HIGHLY ENTERTAINING with some crazy visual work. #KartikAaryan is beyond TERRIFIC, #KiaraAdvani is FLAWLESS while #Tabu is the very SOUL of the film. 2nd Half dominates, while climax is MIND BOGGLING with epic twists. (1/n) pic.twitter.com/TNuAXaaVIW

@TheAaryanKartik the superstar on his way to be the best one from his generation. #BhoolBhulaiyaa2 shows takes a SOLID START at the Box Office. Going per early morning shows its looking like a ₹15cr opening #KartikAaryan https://t.co/W2Y4YmP3Ba

The truth: it DELIVERS in entertainment: and that’s what the MASSES want! #Tabu is the star of the show: An absolute chameleon #KartikAaryan fares well.
It deserves praise

Kangana Ranaut’s Dhaakad has also been in talks for a while for being the first female centric action film. The film casts Kangana Ranaut, Arjun Rampal, Diya Dutta, Saswata Chatterjee and Sharib Hashmi. People were excited about Dhaakad just as much as Bhool Bhulaiyaa 2 and have taken to Twitter to talk about the film now that it is out:

#Dhaakad is soooo good, if you guys wanna support good cinema then go and watch the movie in theatres #KanganaRanaut is undoubtedly the best actress right now, give her the due credit, can't imagine anyone playing the role

Also Read: ‘Dhaakad’ Review: Kangana Packs A Punch, But Predictable, Failed Plot Makes You Want To Sleep. ‘So Ja Re’

No one paid me. I ain’t @kamaalrkhan or @taran_adarsh who’ll call a CRAP film MASTERPIECE for money. I’d still give #BhoolBhulaiyaa2 (2.5 ⭐️) & #Dhaakad (3.5 ⭐️). Like them if I have millions of FOLLOWERS I will use it as my voice for the betterment of cinema. Check my tweets 🙏 https://t.co/nD8HZrT2hS

#DhaakadReview #Dhaakad is POWERFUL. UNCONVENTIONAL . FUTURISTIC.
While #KanganaRanaut surpasses VERSATILITY, #ArjunRampal is the MODERN VENOM with #DivyaDutta having her own charm. But, it is #SaswataChatterjee who SHINES throughout. HARDCORE ACTION included with GRIPPING 1/n pic.twitter.com/h0FOq2z1Qt

#PoonamPandey after watching #Dhaakad till interval- I am shocked this kind of movie is made in bollywood, such a beautiful movie.

Script and performance of each actors are incredible.

Strong words are coming from each one who watched #Dhaakad ✌#KanganaRanaut

– A great action movie, worthy of an even bigger sequel. #KanganaRanaut is FLAWLESS, #ArjunRampal looks deadly. Script, camerawork, execution; everything is top notch. But what wins you over is Hollywood like screenplay & action sequences.

It’s interval and till here each scene of film #Dhaakad is perfect, superb and brilliant. #KanganaRanaut done superb and #Dhaakad job. If 2nd half is as good as first half, then it will be a sure shot blockbuster.🔥🔥 #DhaakadReview #DhaakadTrailer #DhaakadKangana #DhaakadMovie https://t.co/HL9oReXsVt

Saw #Dhaakad at Overseas Censor Board & it’s One of the Best Action Thriller ever made in India ! #KanganaRanaut Stole the Show all the way & No doubt, She is no. 1 Actress in India now. Plz go & book your tickets now !!!

The fact that two big films released on the same day and have gotten good reviews. I am yet to watch Dhaakad but the reviews make me hopeful and kinda get me to look forward to watch the film. Congratulations to the team of both: Dhaakad and Bhool Bhulaiyaa 2 for working so hard on and releasing clear winners.