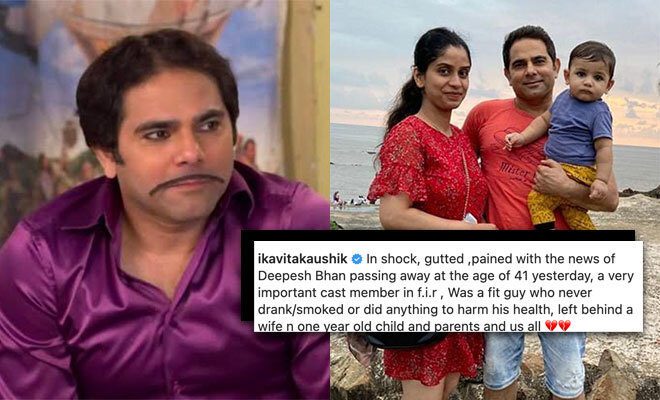 The Hindi sitcom Bhabiji Ghar Par Hai is one of the most popular shows of all time on Indian television and Deepesh Bhan was one of the most-loved actors in the series. Now, it is with a very heavy heart that I am informing you that Deepesh Bhan has passed away. He was 41 years old.

As per reports, Deepesh breathed his last on Saturday while he was playing cricket in the morning and collapsed. He was rushed to the doctor as well. The true cause of his death is still not known. His co-stars and fellow actors have poured in condolences and are mourning his sudden death.

Actress Kavita Kaushik took to her Instagram handle to confirm the news of his death. She also penned a lengthy note paying a tribute to him. In the caption of her post, Kavita wrote, “In shock, gutted ,pained with the news of Deepesh Bhan passing away at the age of 41 yesterday, a very important cast member in f.i.r , Was a fit guy who never drank/smoked or did anything to harm his health, left behind a wife n one year old child and parents and us all 💔💔.”

Charrul Malik who also worked with Deepesh Bhan on Bhabhiji Ghar Par Hai also took to her Instagram handle to express her condolences.

Rohitashiv Gour, who also worked with Deepesh Bhan, has expressed shock at his death. As per reports, Gour said that they had a late call for shoot that day and therefore, Deepesh had gone to the gym and later went to play cricket. He further added that he collapsed on the ground. Rohitashiv Gour has also informed that the entire team of the show are at his residence.

Deepesh Bhan is survived by his wife and one-year-old son.