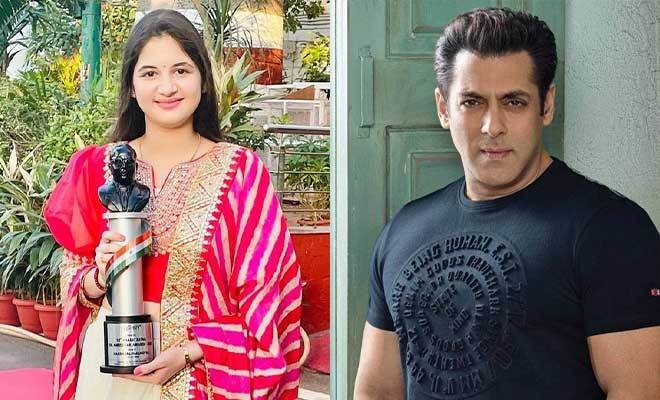 You guys remember Harshaali Malhotra, right? She made her Bollywood debut with Salman Khan in Bajrangi Bhaijaan, in which she played the role of Munni or Shahida, a mute girl from Pakistan who gets lost in India. Recently, Harshaali Malhotra was honoured with Bharat Ratna Dr. Ambedkar Award, which she has dedicated to her co-star and Bhai of Bollywood, Salman Khan.

Harshaali Malhotra has received the Bharat Ratna Dr. Ambedkar Award for her exceptional performance in the film Bajrangi Bhaijaan and other television series. She shared a few pictures with her award on her social media account and dedicated the award to Salman Khan, Kabir Khan (who directed Bajrangi Bhaijaan), and casting director Mukesh Chhabra. In the pictures, Harshaali Malhotra is all smiles as she is posing with the trophy. She can be seen in a red and white lehenga with a pink and golden border dupatta and she looked so gorgeous.

Harshali also shared the letter informing her about the award which read, “12th Bharat Ranta Dr. Ambedkar Awards 2022 ceremony is being organized in the memory of Dr. Babasaheb Bhimrao Ambedkar, the principal architect of the Constitution of India, on the occasion of the upcoming 73rd Republic Day. You did a very commendable performance in the movie Bajrangi Bhaijaan. Apart from this, you have also acted well through TV and films. Your contribution in the field of Indian Cinema is very important and commendable, so our Jury Committee has finalized your name for 12th Bharat Ratna Dr. Ambedkar Award 2022.”

In another post, Harshaali shared a picture from the award ceremony where she is receiving the award from Maharashtra governor Bhagat Singh Koshyari. “Blessed to receive Bharat Ratna Dr. Ambedkar national award from Shri. Bhagat Singh Koshyari (Governor of Maharashtra)…#blessed #gratitude #proud #moment #bollywood #actress,” she wrote in the caption.

Harshaali Malhotra has featured in Bajrangi Bhaijaan which was released in 2015. The film was directed by Kabir Khan and also features Salman Khan, Kareena Kapoor, and Nawazuddin Siddiqui. The story of the film revolves around Salman’s character, Pawan, who finds little Munni in India and takes it upon himself to reunite her with her family in Pakistan. Bajrangi Bhaijaan was a critical and commercial success and even won the National Film Award for Best Popular Film Providing Wholesome Entertainment.