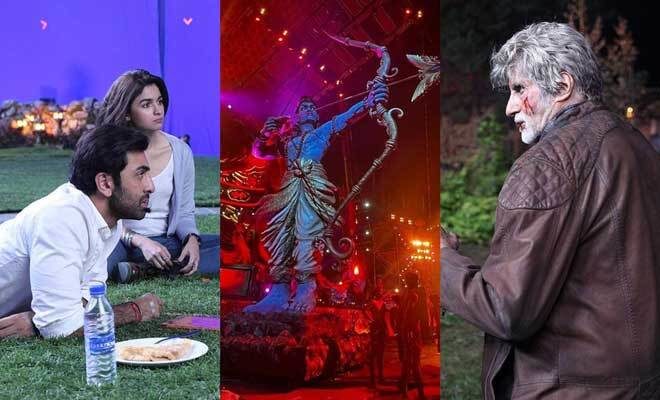 Brahmastra is an upcoming Bollywood movie featuring Ranbir Kapoor, Alia Bhatt, Nagarjuna, Amitabh Bachchan, and Mouni Roy. The film is written and directed by Ayan Mukerji and has already gained a lot of attention because it’s a superhero genre film with a superstar loaded star cast. And as a superhero fanatic and a Bollywood fan, I’m excited! Recently, Ayan Mukerji, who has spent six years on this story, and a lot of time and effort in making this film, shared a few behind-the-scene pictures on social media of the leading cast during the filming of the movie. And as expected, fan anticipation is through the roof!

The Yeh Jawaani Hai Deewani director took to his Instagram handle and shared pictures of the lead cast including Ranbir Kapoor, Alia Bhatt, Amitabh Bachchan, Nagarjun, and Mouni Roy, giving us FOMO-ed fans a glimpse of the actors’ looks from the film. The setting looks special and intense.

Ayan Mukerji wrote in his caption, “Flashes of Time (2)!,” while sharing an adorable of him with Ranbir and Alia, seems like they are discussing something important. In another pictures from the post, he can be seen with south superstar Nagarjun and Big B, and the Naagin of TV industry Mouni Roy. The black silhouette of Mouni with deep red background is so intense and intriguing!

Just a couple of days ago, Ayan had shared pictures of Ranbir and Amitabh Bachchan with some props of the film. Take a look:

Brahmastra is Ayan Mukerji’s dream project which has been in making for almost three years now. According to the sources producer Karan Johar, Disney India, and the whole team of the film have finalised the release date for the film, which has Ranbir Kapoor and Alia Bhatt as the lead is expected to release on September 9, 2022.

Also Read: We’ll Admit It. The Real Reason We Want to See Brahmastra Is Alia And Ranbir’s Chemistry

The makers of the movie are planning to release the film on the occasion of Ganesh Chaturthi. And we cannot wait to finally watch this trilogy!

Rekha And Jaya Bachchan’s Old Unseen Picture Is Now Going Viral. So, They Were Friends Once?