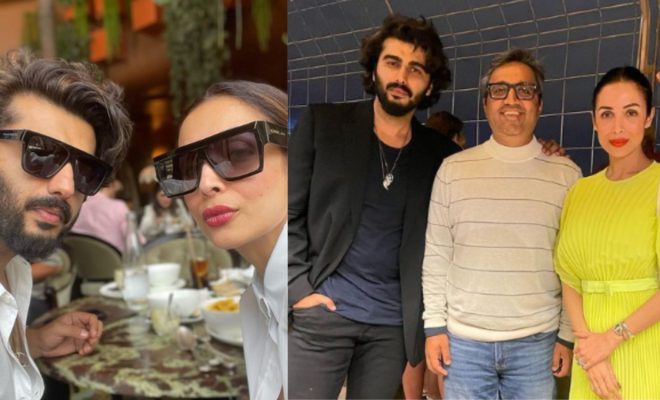 It is vacation time for most celebrities now and we are definitely being served with stunning pictures. Arjun Kapoor who is currently in Paris with the love of his life Malaika Arora and the couple are definitely having the best time of their lives. The couple even celebrated Arjun’s birthday in the most special way in Paris. Such trips become even more special if you unexpectedly bump into someone known and end up having a really good time. A similar incident happened with Malaika and Arjun, who had a random rendezvous with Shark Tank’s Ashneer Grover while all of them were enjoying a great time in the Eiffel tower.

Ashneer Grover took to his Instagram account to share the pictures from his meet-up with Arjun Kapoor and Malaika Arora. They bumped into each other while they were enjoying the Paris view from the Eiffel tower. The couple met Ashneer, who was also there with his family, on the Eiffel Tower. Ashneer captioned a photo he shared with Arjun and Malaika and wrote “Rendezvous avec Birthday Boy” and “ravishing Malaika Arora”. He also wrote a line in french “Tres gentil et tres jolie!”, roughly translated as “very kind and very pretty”. Malaika looked gorgeous in a yellow dress, and Arjun Kapoor looks cute and dashing in his semi-formal look.

Shark Tank India’s Ashneer Grover also shared another picture with just actor Arjun Kapoor. For the caption, he firstly wished Arjun Kapoor on his birthday then went on to write that Arjun is a “true Kapoor”. Ashneer also referred to the actor as “dashing, charming and super funny”. The picture is a really happy one as both of them put on the brightest smiles. In this post, Arjun Kapoor made a jesty comment as well by complimenting Ashneer and also thanking him for the birthday wishes.

Also Read: Malaika Arora Had A Cute Birthday Date With Beau Arjun Kapoor In Paris. The Love Is In The Food!

Such unexpected meet-ups in distant lands are always fun and special!